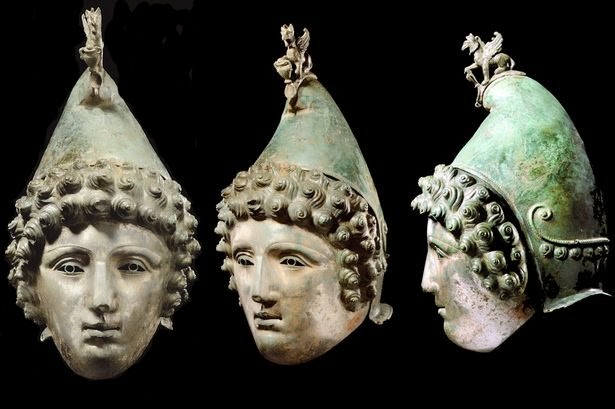 FOUR years after this spectacular Roman helmet was found by a father and son using a metal detector, experts have revealed some of its secrets ... suggesting it was worn in equestrian spectacles ... a sort of "Strictly Come Dancing ... on Horseback."

It is called the Crosby Garrett helmet after the name of the hamlet where it was found near Hadrian's Wall in northern England.

The discovery made headlines worldwide and the helmet was sold by London auctioneers Christie’s for £2.3 million ($3.8 million) to a private buyer, who loaned it for display at the Tullie House Museum in Carlisle, England.

The three-month exhibition, which ended on January 26, drew 20,402 visitors – the most successful ever display at Tullie House.

Now, experts have published a book which explains some of the mysteries surrounding this stunning helmet, according to a report in THE JOURNAL newspaper.

The object has two principal components – the helmet bowl which covered the top, sides and back of the wearer’s head and a mask in the form of a human face.

You can ORDER THE BOOK HERE.

In the book, the authors say the helmet is of a type which would have been worn by Roman cavalrymen taking part in a spectacle called the "hippika gymnasia."

This was a mock combat featuring two opposing defense and attack teams.

"These events would have been part-training, part-display – a sort of Strictly Come Dancing on horseback," says Dr Mike Bishop, who worked for 10 years as an archaeologist.

He co-edited the booklet with Professor David Breeze, past president of the Society of Antiquaries of Newcastle upon Tyne and president of the Cumberland and Westmorland Antiquarian and Archaeological Society.

From the outset, the helmet has exercised a fascination for experts and exhibition visitors alike.

This is not surprising, given that it was probably originally meant to have a psychological effect on those who viewed it.

"The helmet is one of the great masterpieces of Roman metalwork – unparalleled in detail and the most complete and elaborate of only three such helmets to have been found in Britain," says Roger Cooke, chairman of Tullie House Museum. 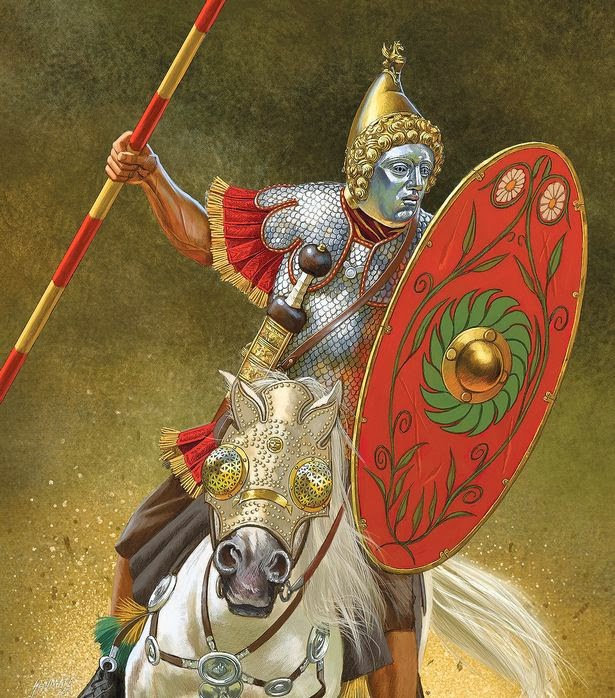 Mike Bishop says: "The helmet is a remarkable find. It has a hauntingly expressionless face."

This rendering by artist Johnny Shumate shows how the Crosby Garrett helmet would have looked in action.

Dating from the 3rd Century, the helmet was discovered at what is believed to have been a Romano-British farmstead. occupied by native people.

The find site was investigated by archaeologists who established that it contains substantial Romano-British and prehistoric remains.

The area was the territory of the Carvetii, whose capital was Carlisle and who were given self-governing rights by the Romans.

"Why the helmet was buried there is a question we may never be able to answer," says Mike.

"It may have been somebody’s heirloom, the prized possession of an old cavalryman who had formed an association with a local woman and settled down, or it may have been stolen and hidden away."

Analysis of the helmet has shown it to be 82% copper, with the face area tinned.

This would have produced an impressive contrast of the shiny silvery appearance of the face against the coppery gold of the helmet.

The eyes are pierced to allow the wearer sufficient vision, with eyelashes and eyebrows marked.

The nose has pierced nostrils and the pursed lips are parted, and separated by a horizontal slit, while the face is framed by curls.
On top of the helmet's cap is the figure of a griffin. A similar griffin was found at Vindolanda fort in Northumberland.

The Roman writer Arrian describes face-mask helmets and the events at which they were worn:

"The riders, according to rank or because they distinguish themselves in horsemanship, set off with golden helmets in order to attract the attention of onlookers by this means."