IS 'THE POMPEII EFFECT'
BRINGING NEW LIFE TO THIS LOST CITY? 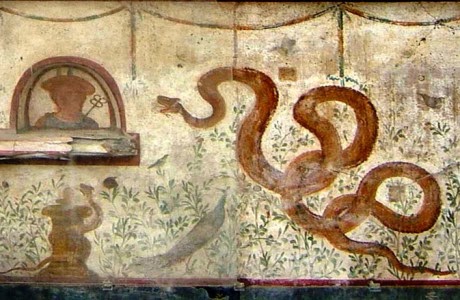 AFTER the incredibly successful exhibition organized in 2013 by the British Museum and the popularity of the documentary produced and shown at cinemas worldwide , the "Pompeii Effect" is in full eruption.

And it is expected to grow in force thanks to a new 3-D blockbuster POMPEII, just released in theaters.

Add to all of this the important conclusion, after more than a year, of the restoration work on the House of Criptoportico (Domus del Criptoportico, image above), which is the first of a series of interventions within the “Grande Progetto Pompeii” (The Great Pompeii Project), the project of recovery of the entire archaeological site, which has suffered collapses and very bad maintenance in recent years. 105 million euros have been allocated for the project to be used by 2015, or they will be lost.

It also appears that the news of the big restoration project has sparked the interest of the Ambassador of Kuwait, Sheikh Ali Khaled Al- Sabah, who, during a recent trip to Italy, has shown an interest in investing in the development of the site, saying that it would be an intervention with no promotional purposes or for profit.

Meanwhile, other sites recently have recalled their association to Pompeii, such as the necropolis discovered in Concordia Sagittaria, dubbed by some "Little Pompeii," and the 1 century AD Roman domus emerged in Arezzo.

We hope all of the positive news means we are entering a new phase for Pompeii so that it is better preserved and safeguarded and that the roughly 2 million visitors a year can fully enjoy the site in all its glory.