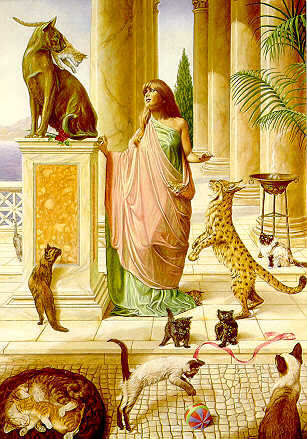 THE skeletons of six cats, including four kittens, found in an Egyptian cemetery may push back the date of cat domestication in Egypt by nearly 2,000 years.

The bones come from a cemetery for the wealthy in Hierakonpolis, which served as the capital of Upper Egypt in the era before the pharaohs.

The cemetery was the resting place not just for human bones, but also for animals, which perhaps were buried as part of religious rituals or sacrifices.

Archaeologists searching the burial grounds have found everything from baboons to leopards to hippopotamuses.

It is generally accepted that the modern domesticated cat was created by the Ancient Egyptians through generations of "genetic modification" … selective breeding.

It is well-known that the Egyptians worshiped the cat goddess BAST. Archaeologists have even discovered a CAT TEMPLE in Alexandria which may have been visited by Antinous and Hadrian in the year 130 AD.

However, the new find indicates cats were domesticated much earlier by the Egyptians than hitherto believed.

The new find includes two adult cats and four kittens from at least two litters. The size of the bones and timing of the litters hints that humans had kept the cats as pets.

The bones date back to between 3600 BC and 3800 BC, which would be 2,000 years before the earliest known evidence of cat domestication in Egypt, archaeologists report in the May issue of the Journal of Archaeological Science.