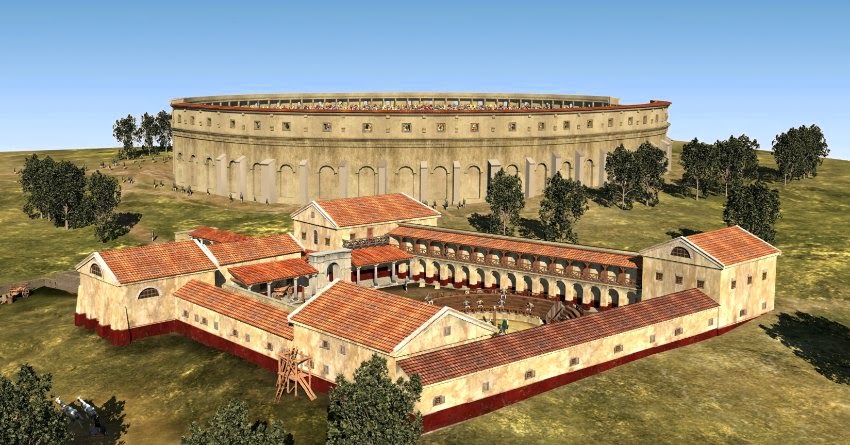 AN ancient Roman gladiator school dating back to the time of Antinous and Hadrian has been discovered in Austria, complete with cell blocks, a training arena and a bath complex, archaeologists say.

The buried remains of the school — at the site of Carnuntum, near Vienna — were detected not through excavations but through remote-sensing techniques. Based on these findings, researchers reconstructed the gladiator center in virtual 3D models.

The newly discovered gladiator school, or ludus, covers 30,138 square feet (2,800 square meters), and the building complex is arranged around a central courtyard.

The school was built during the 2nd Century AD, Wolfgang Neubauer of the University of Vienna told Live Science.

"The most prominent feature inside the courtyard is a free-standing circular structure 19 m [62 feet] in diameter, which could be interpreted as the training arena for the gladiators," the authors write in the journal Antiquity.

The researchers, led by archaeologist Neubauer, say this arena would have been surrounded by wooden spectator stands set on stone foundations, which were clearly visible in the ground-penetrating radar data.

These measurements also revealed something like a post-hole in the middle of the arena.

"This might be the foundation of the palus, a wooden pole used for exercising blows with the sword and body slams with the shield," Neubauer and colleagues wrote.

In the southern wing of the building complex, the researchers detected cell blocks that each covered only 32 to 75 square feet (3 to 7 square meters).

Cells of a similar design have been found at the barracks at the ludus magnus, the gladiatorial school close to the Flavian amphitheater in Rome, the archaeologists wrote.

Other rooms along the western wing at Carnuntum were more spacious and were perhaps even decorated with tile floors. The researchers wrote that these chambers "were most likely reserved for the highest ranking gladiators or the instructors, many of whom probably were drawn from the ranks of senior and ex-gladiators."

The site also contains evidence of the living quarters of the school's owner, or the lanista, and a bath complex, where the gladiators could recover from their harsh training, the report says.