ANTINOUS ENCOUNTERS ZOROASTRIANISM
IN THE TEMPLES OF ARMENIA 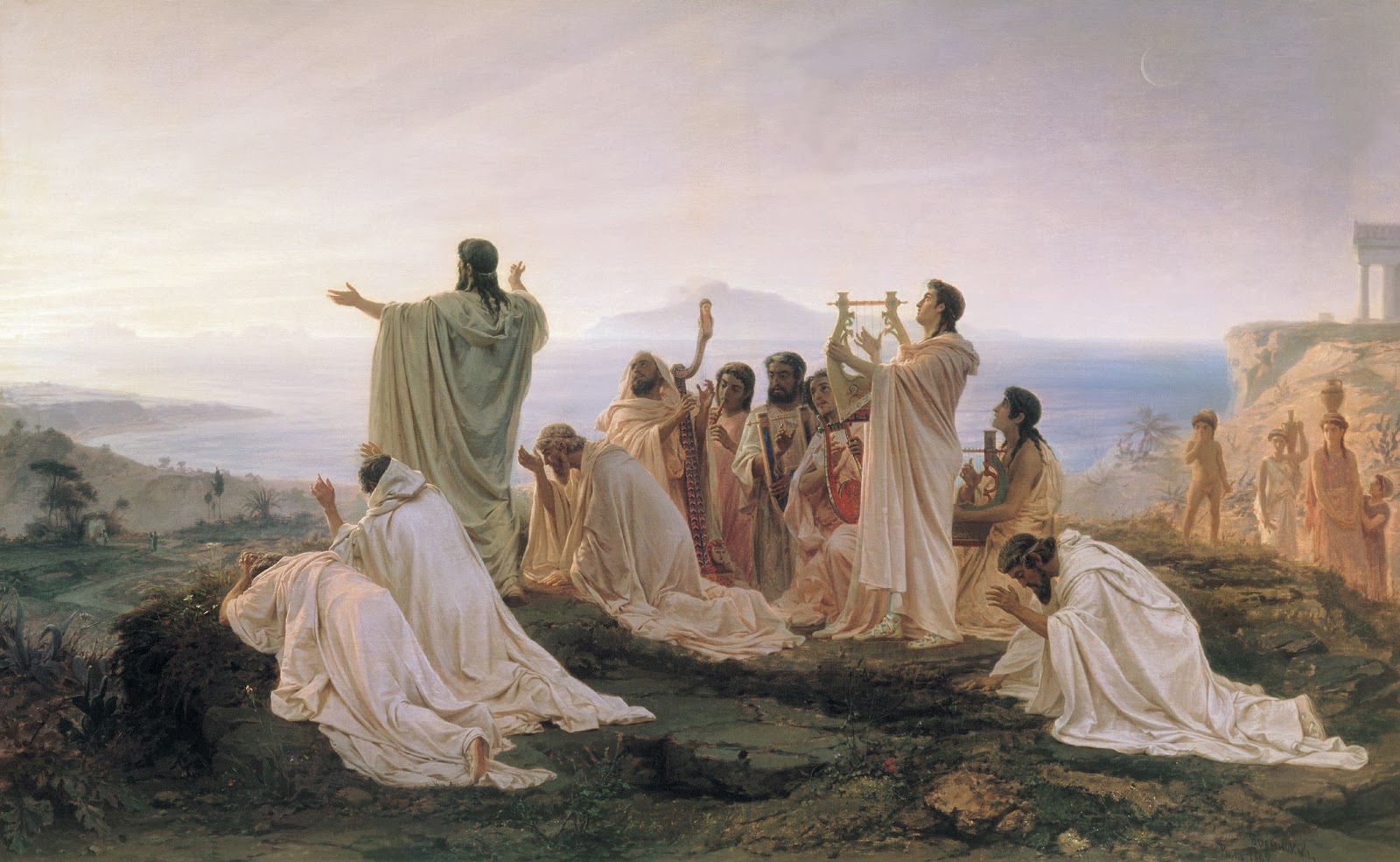 IT was in Armenia that Antinous first encountered the teachings of the Pythagoreans and the Oracles of Zoroaster, the basis of Neo-Platonic beliefs.

In this painting by Fyodor Bronnikov, Pythagoreans celebrate the sunrise. It is possible that Hadrian and Antinous took part in similar ceremonies in Armenia at the beginning of February, mid-way between the Solstice and the Equinox.

According to Pythagorean beliefs, the Primordial Unity is called Aion (Eternity). This indescribable and unimaginable deity is beyond the limits of Time and transcents all dualities including that of being and non-being.

The Imperial entourage bearing Hadrian and Antinous had arrived in Antioch in June 129 where, according to Lambert, "the atmosphere of the voyage evidently began to turn a little sour."

Hadrian became aware that the polyglot mixture of peoples in that region were a rebellious bunch of Jews, radical Christians, Baalists and other hot heads who were intent on making trouble for the Romans.

The court spent much of the winter 129-30 in Antioch, but Hadrian and Antinous set out with a light escort across lower Cappadocia and into Armenia.

This is the furthest East that Antinous was ever to travel and is observed here in conjunction with Imbolc, also known as Candlemas, a festival of newborn light.

Though indigenous and Phoenician deities were worshipped, the Armenians of this time are considered to have been Zoroastrians because of the many hundreds of years that they had been controlled and influenced by Persia.

Their religion venerated fire as the manifestation of the Ahura Mazda, the God of Light who had descended into the Kingdom of Darkness, which is our world, in order to fight the evil one and prevent his rise to the place of eternal light.

Life on earth is understood by Zoroastrians as the struggle between our double natures. The body is composed of evil and darkness, the spirit is made of fire and light and belongs to Ahura Mazda.

Thus Imbolc/Candlemas truly is the Dark/Light turning point between the Yuletide season and Carnival. We'll be hearing more about that in coming days as gays in many regions take part in Mardi Gras celebrations.

Antinous would have been exposed to the influence of Zoroaster while visiting the Temples in Armenia, and because it is the furthest point East in his travels, it is symbolically the nearest he came to the rising sun.