IN VICINITY OF ANTINOOPOLIS 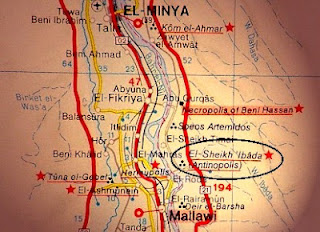 EGYPTOLOGISTS are calling it the best-preserved tomb since the discovery of Tutankhamun's tomb — and it is located only 5 km (3 miles) south of the Sacred City of Antinoopolis.

The well-preserved 4,000-year-old coffin and funerary equipment of a Middle Kingdom provincial governor was found in the famous Deir Al-Barsha necropolis on the east side of the Nile between the Upper Egyptian cities of El-Minya and Mallawi.

The site is directly across the river from El-Ashmunein, which the Ancient Egyptians called Shmunu, and which the Greeks called Hermopolis, the Sacred City of Thoth/Hermes. During Hadrian's Imperial Tour, Hermopolis was the last city that Antinous saw before his tragic death in late October of the year 130 AD.

Emperor Hadrian said Antinous "plunged into the Nile" and ordered that a city be built at the site on the east bank of the Nile — the SACRED CITY OF ANTINOOPOLIS.

The Deir Al-Barsha necropolis or cemetery is in what we would call the "suburbs" of Antinoopolis, just south of the Sacred City. This necropolis is famous among Egyptologists for the many tombs located there dating back to all periods of history — from the earliest pharaohs to the Roman era, during which Antinoopolis rose to glory as the new capital of the Thebaid district.

It is important to remember that this district was the Sacred Heart of Ancient Egypt — mid-way between Thebes in the south and Memphis/Mennefer in the north. The "heretic" pharaoh Akhenaten located his "City on the Horizon" Akhetaten in this area, just 20 km (12 miles) south of Antinoopolis.

And it was at Hermopolis, according to legend, that the priests of Thoth kept the Scroll of Life by which Isis raised Osiris from the dead. The fact that Antinous died here spawned speculation throughout the ages that he may have been engaging in a religio/magical rite to sacrifice himself so as to prolong the life of his sick and aging lover Hadrian.

Because of this ages-old association with the triumph of life over death, this area is dotted with thousands upon thousands of tombs, the vast majority of which have never been investigated. No one knows what happened to the mortal remains of Antinous, whether they were cremated or interred — or whether one of these tombs might in fact be the LOST TOMB OF ANTINOUS.

So any tomb discovery in this region is important and immediately raises hopes among Egyptologists that they may be one step closer to that big discovery.

In this case, Belgian archaeologists from the Katholieke Universiteit Leuven stumbled onto a major tomb dating back to the beginning of the Middle Kingdom — 2,000 years before Antinous was born.

"It is the first time in over a century that a relatively well preserved tomb of this kind has been found," said Mohamed Ibrahim, Minister of State for Antiquities. He went on to explain that, although the tomb was robbed at least twice in antiquity and has suffered extensive damage since, a large part of the funerary collection was found well-preserved and intact.

Initial investigation suggests that the tomb must belong to one of the nome or district governor or a member of his family.

The finds included ritual funerary objects in alabaster, faience, copper and pottery found intact and untouched — still embedded in the dried lime crust, according to Mohamed Ismail, the director of Foreign Missions Affairs at the Ministry of State for Antiquities (MSA). The exquisite discoveries include many alabaster model vessels, offering table head rests, faience libation vases, copper vases and dishes.

These funerary items, Ismail explained, enable Egyptologists to envision how ancient Egyptians practiced their religious rituals in detail. He went on to say that Ancient Egyptians might have installed the sarcophagus in the middle of the burial chamber and then started the purification and offering processes.

Harco Willems, field director of the Belgian mission, told Ahram Online that the sarcophagus is inscribed with texts showing that it belonged to a man called Djehutinakht.

"Djehuti" is the Ancient Egyptian name for Thoth/Hermes. And "Nakht" means "Strong One." So the name Djehutinakht literally means "Strong One of Thoth." The Sacred City of Thoth, Hermopolis, was immediately across the Nile from this burial site.

"Djehutinakht is known to have been the last nomarch of the Hare Nome of the First Intermediate Period. It can now be concluded that this person was buried here."