PUTS THE WONDER BACK IN OLD GORDIANUS 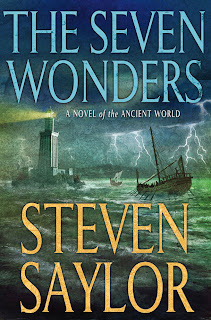 GORDIANUS is back and his legions of fans can take delight in finding out — at long last — how Gordianus the naive teenager became cunning and cynical "Gordianus the Finder," the finest sleuth in the turbulent waning days of the Roman Republic.


THE SEVEN WONDERS is the prequel to a dozen previously published Gordianus novels and short-story collections by award-winning, openly gay writer STEVEN SAYLOR.

Last seen, Gordianus was semi-retired and had more or less been turned out to pasture by Saylor, who turned his attention to epic novels about Rome spanning generations and centuries. Those epic novels were really quite good — good, but not great — and Gordianophiles were worried.


Had Saylor done what Sir Arthur Conan Doyle did with Sherlock Holmes? Weary of writing "trivial" serialized short novels, and itching to be regarded as the next Dickens, Conan Doyle dispensed with Holmes  — sent him hurtling over the Reichenbach Falls with Moriarty. And Conan Doyle turned to epic novels which were quite good — but not great.


Under pressure from fans (and his publishers), Conan Doyle grudgingly brought Holmes back in a "now it can be told" prequel about his most remarkable case prior to his tragic demise — "The Hound of the Baskervilles" — considered Conan Doyle's best novel, if only because grieving readers were so delighted to see their hero in his youthful prime of vim and vigor.


Saylor has done the same with THE SEVEN WONDERS, which is in many ways his best novel. Gordianus is no longer old and world-weary. He is 18 years old, wide-eyed and boyishly naive. All his sleuthing skills are there, but he hasn't yet developed a really good investigator's ability to look at a case objectively and to eliminate the impossible, so that whatever remains (no matter how improbable), must be the truth. 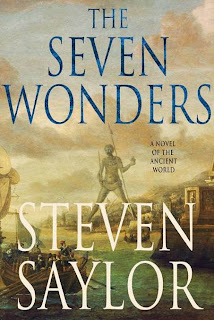 Gordianus develops this ability during his travels with his tutor Antipater of Sidon to see all Seven Wonders of the World.

As always, Saylor's historical accuracy is impeccable, and his readers have fun cross-referencing even minor characters and place names in their bedside LEMPRIÈRE'S for subtle details and wry clues that more casual readers may overlook.

This is "vintage" Saylor at his best, stringing together vignettes and colorful characters which seem to bear no relation to each other and which this brilliant author then weaves together into a Holmesian final chapter in which all is revealed.


(Speaking of revelations, there are a few "spoilers" in the next few paragraphs ....)

This time the vignettes and characters could not be more disparate. There are murders and mysterious goings-on which young Gordianus solves easily and whose outcome the reader has just as easily foreseen.

Some of these vignettes have appeared as short stories in magazines and seem to have been cobbled together for the book. The reader is just about to conclude that this is indeed primarily a travelogue collection of short mysteries in exotic locales, when ... all of a sudden ... Saylor works his magic and begins weaving all those disparate vignettes and characters together into a tale of espionage and intrigue which poses an imminent threat to Rome itself.

Young Gordianus realizes (as does the reader) that everything had been inter-connected and nothing and no one had been what it had appeared to be.

"The world is not as simple as you think," Antipater says to Gordianus. And it would never be as simple ever again for Gordianus in his subsequent exploits. The lessons he learns from Antipater put his career into perspective.

Along the way, young Gordianus beds gorgeous wenches at the Olympiade, consorts with a witch in the ruins of Corinth, sees a boy morph into a girl at the pool of Hermaphroditus, gets seduced by a high-class madame in Hallicarnassus, has gay sex with a beefy blond Gaul who is the true-life Colossus of Rhodes, receives sexual favors from a priestess of Ishtar in Babylon and even has mystical conjugal union with Isis in a sarcophagus buried deep inside the Great Pyramid.

Everything culminates in a fiery climax atop the Pharos Lighthouse at Alexandria when all is revealed quite literally in a blinding flash — and Gordianus the nice teenager from Rome has become "Gordianus the Finder."

After the success of "Hound of the Baskervilles", Conan Doyle had no choice but to write additional "prequels" about the early adventures of Sherlock Holmes, and eventually had to bring Holmes back from the dead so as to fight the Kaiser in World War I.

Last seen, the Great Detective had "definitely retired from London" and had taken himself "to bee-farming on the Sussex Downs" of southern England ... where he presumably still resides, when not appearing in some book, movie or TV mini-series.

That means Saylor now has no choice but to pen further early adventures of Gordianus and to stave off his demise indefinitely. Gordianus still alive somewhere in the world today? Impossible, you say?