THE WOLVES OF KROMER

ABOARD THE BARQUE OF MILLIONS OF YEARS 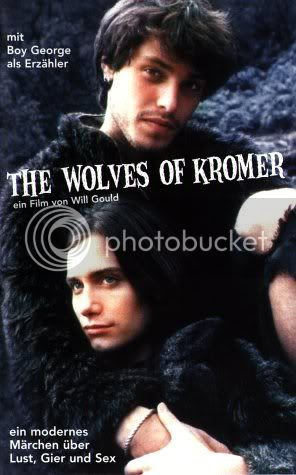 "TODAY is Warren's Birthday!" the DJ will announce over the amazing speaker system aboard the ANTINOUS BARQUE OF MILLIONS OF YEARS.

As I said in the earlier entry today...the whole ship will freak out...a disco ball will drop from the mast...and confetti will shoot from the cannons!

...and this is the song that they will all rock out to...a song we're all going to dance to one of these days:

The song is at the ending credits o the movie THE WOLVES OF KROMER.
a great little movie about gay werewolves (kind of)
Actually werewolves is used as a euphemism for Gay.
It stars these two super hot boys who fall in love and find out that they are both wolves,
and they run around in fur coats with tails (excellent!)
At the end of the movie (I'm just going to tell you)
The village priest hunts them down and shoots them with a shot gun.
This is how the movie ends....when they meet in the afterlife
along with also this old lady who was nice to them before she died.
When I first saw this...I thought it was great,
And I also thought that it would make a great song to dedicate to a dead Antinous worshiper.
That was years ago...and I almost forgot about the song,
But now...since the Wizard Warren is the first of the NEW BELIEVERS to die,
It almost feels as though this song were intended for him.

May Wizard Warren Live Forever
Aboard the Barque of Millions of Years!