THE BARQUE OF MILLIONS OF YEARS 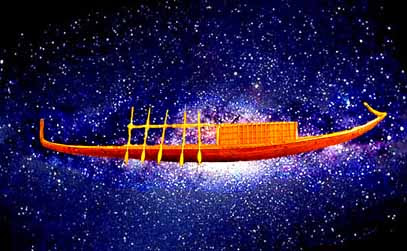 ANTINOUS was a living, breathing human being. That is historical fact. And it is also a fact that he died tragically and that his lover, the most powerful man in the world, the Emperor Hadrian, deified Antinous.
Antinous lived, he died, and he was deified. It is fact.
Now our beloved brother Warren Williamson has died. He is the first of the NEW BELIEVERS IN ANTINOUS to die and we are grappling to come to terms with his death.
And this leads me to an important topic.
How the Cult of Antinous is basically a Cult of the Dead,
...there is a deep current of after-life in our religion.
This is what the BARQUE OF MILLIONS OF YEARS is meant to symbolize,
How basically after death, we set out with Antinous
Upon a Never-Ending journey to a DARK STAR, which may or may not exist,
and to which we may or may not ever arrive.
It isn't about Heaven...but rather the journey to get there...which is everlasting,
and along the way...we simply enjoy the ride...something which in life,
We are never allowed to do for very long.

I would like to suggest that we begin to keep a passenger list,
With the Wizard Warren as the first name,
and then as more and more of us pass away from the world,
Our names will be added to the list of blessed dead.
A list to be maintained by the Priests of Antinous..for as long as there are Priests of Antinous.
In Ancient Rome, there was a funeral society dedicated to Antinous and Diana,
who's members pooled their resources in order to insure that members were given proper Roman Funerals,
even in the event that the family had no money provide for the funeral.
It was basically like an ancient Life Insurance policy,
but with a religious tone, dedicated to Antinous and Diana.

I would like to initiate such an element to our religion,
Basically a request to have a proper Antinous funeral recited at the time of death
For any one who so requests and who insures that the Priests are notified at time of death.
For the time being there would be no charge, as Priesthood is voluntary,
and funeral rites would be offered as a gesture of love and respect,
but for anything more elaborate than a basic recitation of prayers,
..then a compensation system would need to be implemented to pay the costs.
I would suggest that we devise a three tier system.


The $20 by the way is merely representative of the coin that would be placed on the tongue
To pay the boatman of the River Styx...$20 seems like a reasonable charge,
But who knows...maybe you have reason to pay more, or maybe less?

The Free part is offered to everyone,
....just make sure that we know when you die.

I will need help to prepare an Elaborate Full Funeral Ceremony of Antinous,
I don't want to just write it of my own accord,
Please use the Birthday of the Wizard Warren to tell me what you think
A full funeral ceremony of Antinous should consist of,
and keep in mind what you would be willing to pay for yourself.
I know that we have a few members who are well schooled in the customs of the ancients,
let us know what you would say at the death of one whom you love.

May The Wizard Warren Live Forever!