IN THE EGYPTIAN WING OF THE MET 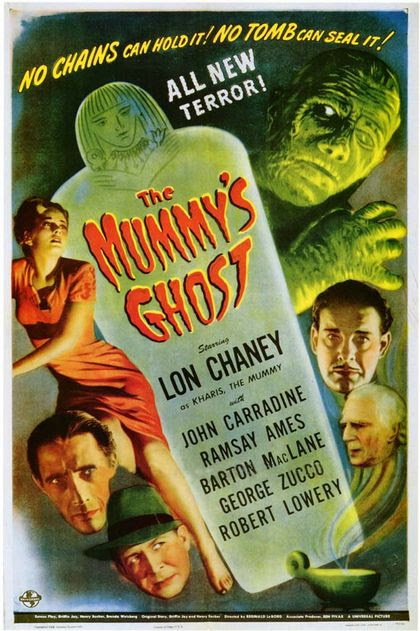 ANTINOUS and Hadrian must have been fascinated by the weird and spooky tales they heard during their final, fateful journey up the Nile in 130 A.D.

The Egyptian Book of the Dead combined with a host of magical rituals, amulets and protocols enabled the ancient Egyptians to cheat death and rise again in the afterlife.

And maybe some ancient Egyptian ghosts have made that journey and returned — well at least to New York's Metropolitan Museum of Art, according to Pete and Stew Kandel (know as Dr. Pete and Dr. Stew) paranormal investigators and licensed New York City tour guides calling themselves "Ghost Doctors."

The Ghost Doctors — who lead groups of adventurous amateur ghost hunters through a variety of NYC's iconic landmarks including the famous Metropolitan Museum of Art — have been searching the hallways and galleries of this famous New York institution for signs of paranormal activity and have found the Egyptian wings to be buzzing with activity.

"The ancient Egyptians held the afterlife in great reverence and much of their culture was devoted to the belief that death is only the beginning," says Dr. Stew. "With this in mind, if you're conducting a paranormal investigation of the Met, the Egyptian wings are definitely a must."

Recently on a ghostly hunt at the Met, the two ghost hunters picked up some strange unusual activity. With a battery of electronic ghost hunting equipment in hand accompanied by a group of anxious but excited ghost hunters-in-training, they detected something.

"We were passing through one of the smaller galleries on the way to the Temple of Dendur (photo right) when one of our instruments just went off," says Dr. Pete. "In fact one particular participant in our group was the first to uncover this activity which was further collaborated by others as well."

The Ghost Doctors say each and every ghost hunt is unique as they never know what will turn up during an investigation.


We wonder what Emperor Hadrian would have thought of the Ghost Doctors. The Emperor is known to have had a fascination (even an obsession) with magic and mystical rites, secret initiations and astrology. He even cast his own horoscopes.
There is even a theory, mentioned by historian Royston Lambert, that Hadrian may have cast a spell that rebounded and resulted in the death of his beloved Antinous. During that fateful final trip up the Nile, just weeks before Antinous died, it was said that Hadrian and Antinous stopped at Heliopolis.
That is the town near Mennefer (Memphis/Cairo) where the Egyptian magician/priest Pancrates gave to Hadrian (or rather sold to him for an exorbitant sum) a magical spell which could bind another man's affections to him forever ... when the spell was cast properly. If cast wrong, the spell would result in the death of the other man.

There was some speculation in ancient times as to whether the death of Antinous may have be related to this strange Egyptian spell. Whether 21st Century sceptics believe in the efficacy of Ancient Egyptian Spellcasting, Hadrian most certainly DID believe in magical spells (being the wise man that he was).

Let's assume Hadrian cast the spell a few days or weeks prior to the death of Antinous ... well, that would certainly explain his inordinate grief at the Blessed Boy's death and his penance in declaring Antinous a god ... perhaps out of a profound sense of guilt.


So we are left to wonder what Hadrian would have thought of the NYC Ghost Doctors and their ectoplasmic claims.

"We constantly get photos emailed to us from people who have gone on our ghost hunting adventures," says Dr. Stew. "People get excited and rightfully so, when they download the pics from a recent ghost hunt and see something strange."

So the next time you're walking through the Met and happen to come across some 3,000-year-old mummies, no need to go looking for Dr. Indiana Jones, New York has its own Doctors — The Ghost Doctors.

Ghost Doctors (http://www.ghostdoctors.com), based in New York City, is the premier ghost hunting tour in NYC. Their ghosts hunts can be suited for both public, private and corporate events.
Posted by Hernestus at 9:00 AM