ANTINOUS AND VALENTINE
DID ANTINOUS MEET ST. VALENTINE?
BOTH IN ALEXANDRIA AT THE SAME TIME 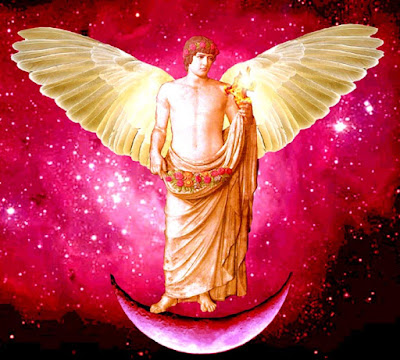 IT is a little known fact that there is a connection between Antinous and the original St. Valentine ... Valentinus of Alexandria. Hadrian and Antinous visited Alexandria in the year 130 AD ... and could possibly have crossed paths with the man who would one day become one of Christianity's most misunderstood saints.

Here is how our own Flamen Antinoalis Antonius Subia explains our own special view of Valentine's Day ... the Day of Love:

"Valentinus was the Gnostic Father who was a bishop of the Catholic Church. He tried to change orthodoxy by introducing the Gnostic speculation.

"Valentinus was from Alexandria and was there, studying with his teacher Basilides, when the court of Hadrian and Antinous arrived.

"He believed that Love was the creator of the universe, and the cause for the fall of Sophia (wisdom) ...

"The love between them was the reason that Jesus descended to save the world. Valentinus began his teaching in Rome, and gained so much support that he was even nominated for the Papacy but lost by a narrow margin.

"Eventually exiled for heresy, the Gnostic Father formed his own rival church that became an influential and widespread Gnostic sect, influencing Gnostic thought down to our own time.

"Because Valentinus was a witness of the Passion of Antinous, and because he attempted to change the Catholic Church, we sanctify his name and venerate him on this sacred day of Eros, the Day of Love."