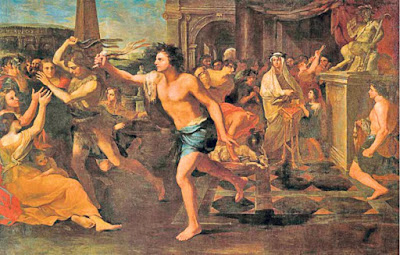 As part of the ancient ritual, a priest sacrificed a dog and a goat and  then smeared their blood on each boy's forehead. Here is the passage from the book (edited for space):
"Hadrian wiped each boy's forehead with wool saturated in milk, stating, 'Romulus and Remus were saved by Lupa who howled her joy at receiving a fresh kill from the Gods. In return Romulus and Remus laughed for joy at receiving fresh milk from the teats of Lupa'." 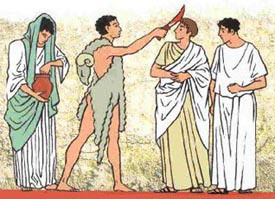 (Then the priests wrapped the goat's skin around each boy's waist as a loin cloth.)
"This was perhaps the worst part for Antinous. He felt pretty sick as the warm, still bloody skin was tied around his precious nether regions.
"The boys now had to run around the edge of the inner city walls using the strips of goat skin to fake flog as many people as they saw. Each person flogged would receive luck and fertility for the coming year. 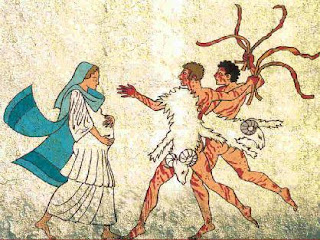 "Antinous found no shortage of willing subjects. There was much hilarity. Some offered hands, others offered naked behinds … some attractive, some distinctly not. The latter got the biggest laughs … particularly if they were older men or plump ladies.
"It took Antinous two hours to 'run' a very short distance. Everyone wanted to be flogged by him specifically.
"It was clear that although this was, in theory, a fun event, to be whipped ritually by Antinous was taking on a more serious meaning.

"Women in particular seemed to be calling out to him with some desperation as if calling out to a God...."
Martin Campbell's book "The Love God" is available in paperback or Kindle: CLICK HERE.
Posted by Hernestus at 12:01 AM