ANCIENT LAPTOP
WAS THIS LAPTOP TAKEN BACK IN TIME?
OR IS IT JUST AN ANCIENT GREEK TABLET? 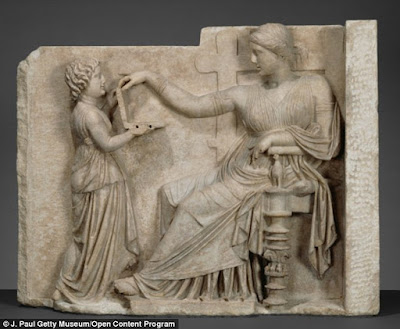 ANTINOUS and Hadrian visited the Oracle of Delphi, which connected priests with super natural beings who passed along advanced technology and information.
NOW conspiracy theorists claim that is how a modern-day laptop ended up in a Greek sculpture from 100 BC.
But historians say the sculpture is just a deceased woman "touching the lid of a shallow chest".
"I am not saying that this is depicting an ancient laptop computer,"  StillSpeakingOut, conspiracy theorist, said in a video he released on YouTube.
"But when I look at the sculpture I can't help but think about the Oracle of Delphi, which was supposed to allow the priests to connect with the gods to retrieve advanced information and various aspects."
The sculpture, "Grave Naiskos of an Enthroned Woman with an Attendant" is on display at The J. Paul Getty Museum in Malibu, California.
"Lounging in a cushion armchair, a woman reaches out to touch the lid of a shallow chest held by a servant girl on this funerary," reads the historian's description. 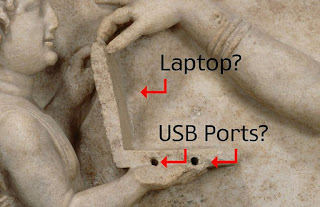 The concept of this image has been a part of Greek funerary art for centuries and most likely pertains to the hope they that will still have the same earthly pleasures in the afterlife.
It depicts an object that closely resembles a modern laptop or handheld device with USB ports, explained StillSpeakingOut.
Another picture taken by a tourist, we see the object is wide but the structure is too narrow to be a jewelry box and it doesn't match the depictions of the mythical Pandora Box either, he explained.
The myth says the Oracle of Delphi would allow priests to connect with the gods, aliens or time travelers who would share 'advanced information and high-tech devices.
Those who don’t believe in aliens or time travel, say the object is a wax tablet that ancient Greeks used for writing with a stylus or pen, reported Inquisitr. 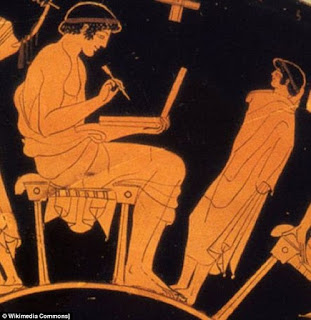 But paranormal investigators argue that the "wax tablet" shown in the funerary relief sculpture does not resemble any other wax tablets seen in Greek art.
StillSpeakingOut says the object shown etched in the sculpture is much thinner than the wax tablets and that the woman isn't holding stylus, also seen in Greek art with individuals using the wax tablet.
Believers do not see the box as a jewel box or a wax tablet, but a modern-day electronic laptop computer with USB ports on the side, which have never been seen in other examples of jewel boxes or wax tablets.
The woman's eyes are focused on the inner lid of the object, the same location of a laptop monitor, conspiracy theorists claim.
And even go so far to argue that the way her fingers are touching the lid looks like she is using a touchscreen device.
"I can't help but think that Erich von Däniken had been right all this time and that most of these myths of magical artifacts given by the gods to a very restricted group of individuals in ancient civilizations were high-tech devices similar to what we have today," said StillSpeakingOut.
Posted by Hernestus at 12:00 AM