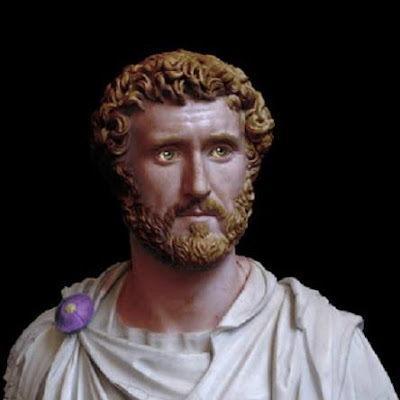 AT the end of February and beginning of March the Religion of Antinous marks Three Holy Days involving the Divine Antoninus Pius.

After the death of Aelius Caesar, Hadrian adopted Antoninus, imposing on him the condition that he adopt two sons, Lucius Verus and Marcus Antoninus to be his successors. Antoninus supported the dying Hadrian for the remainder of his years, and obeyed his commands even after his death. For this Antoninus is called Pius.

As the Fates would have it, March 1st is the date when Antoninus Pius died in 161 AD after 23 years as Emperor. His rule is marked by an almost unbroken period of peace and tranquility. The golden era of Rome, known as the Age of the Antonines, takes its name from Antoninus, because every emperor afterward took up his name as an emblem of glory. Antoninus is the emperor most responsible for the perpetuation of the Religion of Antinous.

He had served as Proconsul of Asia Minor under Hadrian from 130 to 135, while the Religion of Antinous was being formed, and it was during his reign that construction of the Sacred City of Antinoopolis was completed.

The Senate deified Antoninus Pius shortly after his death. The base of the column erected in his honor, shows Antoninus Pius and his wife Faustina the elder, rising up to heaven. They are ascending upon the wings of an Aeon, with Mother Rome on one side, and a beautiful reclining male figure on the other who grasps an obelisk. We believe this figure to be Antinous, guardian spirit of the Age of the Antonines.

Upon the occasion of the Death and Apotheosis of Antoninus Pius, Marcus Aurelius and Lucius Verus became co-Emperors, both surnamed Antoninus, a name which the ancient Romans equate with inestimable glory.

Marcus being the elder and wiser, was given the title Augustus, while Lucius took the name Caesar. They remained cordial to one another though their vastly different characters were always a cause of discord, though never of rivalry or outright animosity. They were a harmonious and cooperative pair of rulers, the only example of effective imperial brotherhood in the long history of Rome.