LUPERCALIA
ANTINOUS AND THE LUPERCALIA 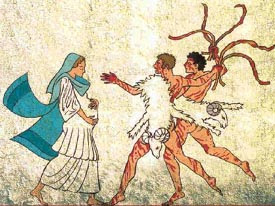 EVEN Hadrian and Antinous would not have known the precise origins of the Lupercalia  ... the ancient rite of spring when young nobles stripped off naked except for fur pelts and ran around the Palatine Hill flinging rawhide strips at females. 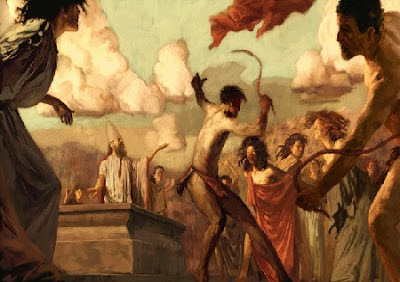 "Antinous took his place at Hadrian's feet, and accompanied him bravely and loyally through the forests and lived by the Emperor's side for seven years, which is equivalent to the life of a strong hunting dog.

"The Canine nature of Antinous is celebrated on this day and is seen as an allegory for the Priesthood of the Religion of Antinous."

Antonius goes on to explain that the Lupercalia festival is a purification rite, cleansing the way for Spring, nourishing the winter spirit of the dormant wolves within so as to fuel the ruthless courage of Roman warriors. A Dog and a Goat were sacrificed, and the young noble youths raced around the city naked except for goat, or wolf skins, whipping any girls or women who they encountered. 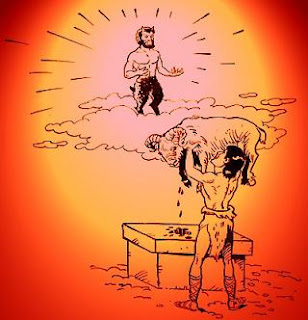 Antonius explains, "The Festival is also sacred to Faunus, the Roman Pan...the one who 'drives away the wolf from the flock.'...we usually think of Pan as Goat-horned and cloven hooved, but 'the one who drives away the wolf'...could quite possibly be a sacred Dog. Lupercalia is therefore quite possibly a dog festival...and it is interesting to note that it falls almost exactly opposite the calendar from the rise of the Dog Star."

Antonius elaborates by adding, "For me, Lupercalia is a time of cleansing and light...the lighted lamp that precedes the coming dawn of Spring...a preparation for the Flowering....

"So a celebration or ritual to observe the Lupercalia should focus on purification. ..self-purification primarily, but also the purification of the home, and surroundings. A cleansing of negative, stagnant, dusty, mildewy, settled, sedimentary influences that we are ready to clear away...from within and without."

He also outlines rituals for purification and cleansing which members of the worldwide Religion of Antinous will be performing this weekend.

Antonius says the Lupercalia harkens to the most ancient of rites of Spring, and he says the cleansing must come from within.

"And then look into your soul, observe your interactions...make changes for the better...be kinder, more polite, or just simply be friendlier to people...and do something strictly for your own pleasure," he says in his Lupercalia Epistle.

He stresses, "It is really a matter of deep and meaningful concentration on cleansing your mind and heart of negative internal influences...so as to strengthen your fortifications against external negative influences."