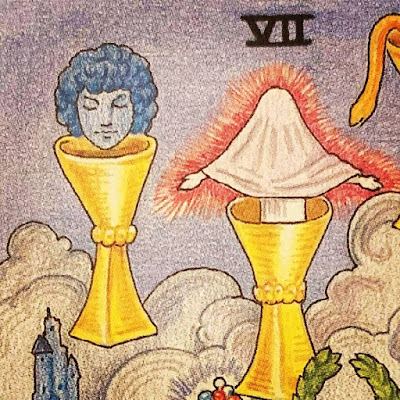 YES! This is Antinous! February 16, 1878, is the birthday of Pamela Colman Smith, who is a canonized Saint of Antinous. Happy Birthday to Pixie (as her friends called her).

When she was working on the Waite Tarot Cards in 1909, the British Museum had a special exhibition featuring the Sola Busca Tarot Cards ... the only Tarot Cards in which all 78 cards were illustrated.

Traditionally, only the Trump Cards were illustrated, and the other 56 Lesser Trumps had numbers and suit emblems but were otherwise not illustrated. 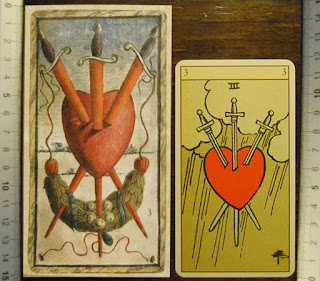 Pamela was so impressed by the Sola Busca Cards that she dragged Waite to the British Museum and insisted that ALL 78 cards must be illustrated and that she would create the art for each and every card.

She forced Waite to agree, despite his reservations that it was unorthodox to illustrate ALL of the cards.

Her version of the Three of Swords is inspired by the Sola Busca deck as you see above right.

Pamela put her heart and soul into each and every card, drawing inspiration from a variety of sources. 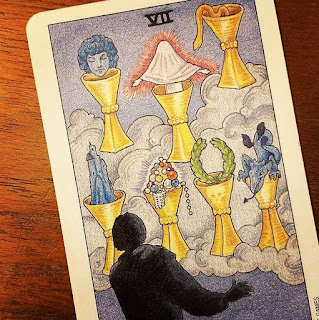 The "Seven of Cups" shows the seeker of the Higher Trump Seven (The Chariot) choosing which goal to pursue.

He has "Seven Visions":

Pamela Colman Smith clearly took her inspiration from the Townley bust of Antinous in the British Museum.

Be sure to read our FULL TRIBUTE to Pamela Colman Smith, the visionary artist who was forgotten in her own lifetime and who died penniless ... but who is immortalized in her Tarot art, which continued to inspire seekers of spiritual illumination ... as exemplified by the seeker in the Seven of Cups. 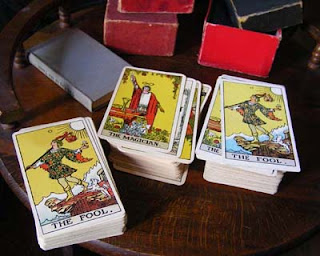