ANTINOUS AND THE ORPHIC MYSTERIES 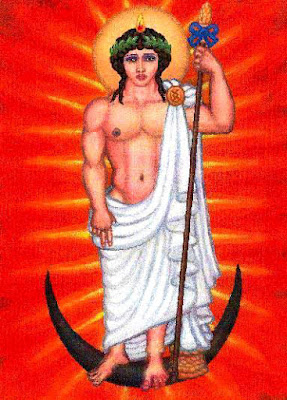 ON THIS DAY, October 1st, the beginning of the holy month of the Sacred Nights of Antinous, we venerate Orpheus.

Antinous our God was initiated into the cult of Orpheus so that his teachings became part of the Religion of Antinous, and therefore we receive the salvation that Orpheus accomplished through our god Antinous, the New Dionysus.

It is on this date that the Religion of Antinous remembers the blessed heritage of The Orphic Mysteries, into which Hadrian and Antinous were both initiated.

The Orphic Mysteries teach that human souls are divine and immortal but doomed to live (for a period) in a "grievous circle" of successive bodily existences through reincarnation.

This belief that each of us is divine and immortal — Man-Godliness-Becoming-One — is the mystery which Flamen Antinoalis Antonius Subia calls HOMOTHEOSIS.

By welcoming this divine force instead of rejecting it, we take the first step away from our instinctive animalistic fearful self on the long road to becoming a Shining One of Heaven.

Hadrian and Antinous must have known by heart the story of Orpheus in the Underworld: Orpheus was the son of Apollo and the muse Calliope, and from his father he received the Lyre and the gift of music.

So powerful was the music of Orpheus that he could tame the hearts of beasts and birds and his song enchanted even the trees and stones.

He was one of the Argonauts who, together with Jason, retrieved the Golden Fleece. Returning from the journey, he married Euridice, but the marriage was short-lived because while fleeing the Shepherd God Aristaios (ironically also often depicted as a form of Antinous in ancient times), who was attempting to rape her, she was bitten by a snake hidden in the grass and died.

Orpheus was so overwhelmed with grief that he used his powers of enchantment to travel to the underworld to bring back his wife.

His music soothed the three-headed dog, and gained his entry into the dark hall of Hades and Persephone. There he sang to the rulers of the underworld, and his song touched the cold heart of the Lady of Death. Persephone decreed that he could lead his wife out of hell provided that he did not turn to see her following.

Orpheus, singing as he went, very nearly succeeded, but at the last moment, at the very gate of darkness, he turned and saw his wife vanish back into oblivion.

Flamen Antinoalis Antonius Subia tells the rest of the story, and why it is important to us:

From that moment Orpheus was a changed man, he became a priest of Dionysus, and gave himself over to intoxication, completely shunning the company of women, and separating himself from the customs of the world. Orpheus is said to have been the first to sanctify homosexuality as an indulgence that frees the soul from  continued reincarnation through the procreation of the flesh. His journey through the underworld gave him a deep detestation of death that he developed into a new philosophy. Orpheus taught that we were all children of the fallen star Dionysus-Zagreus, who had been torn to pieces by the Titans and consumed by them so that his light was mingled throughout their flesh. Zeus struck the Titans down with his lightning and from their ashes arose mankind, fashioned by Prometheus.
So that we will never suffer the fate of passing into the realm of Hades, Orpheus taught that we must restrain our titanic nature and restore the purity of our godliness, we must become Bachkoi, which is that we must become Dionysus again. A pure life, free from murder, including blood sacrifice and the eating of meat is required, and we must undergo initiation into the blessed rites which he inaugurated.
Although part of the religion of Dionysus, the Orphic cult was limited to men. Orpheus wrote volumes of sacred poems that comprised the heart of his new religion. The Orphic cult was a combination of the freedom and indulgence of Dionysus, tempered with the high-minded nobility of Apollo.The Orphics denied the world and set their minds on the inner light of Dionysus so as to liberate the soul from imprisonment within the flesh.

You can see the parallels between the story of Orpheus and Eurydice and the true-life story of Hadrian and Antinous. The emperor mourned and wept and sought to bring his Beloved Boy back to the world of the living.

Hadrian's route through the Underworld was of a purely spiritual nature. He recognized that Antinous had always been Divine — a fact which is a tenet of The Orphic Mysteries. He decided to establish a religion which would enable the followers of Antinous to become aware of their own Divine Nature and to become one with ANTINOUS THE GAY GOD.

It is indeed ironic that this beautiful religion was born out of Hadrian's inconsolable grief. But the divine regenerative sacred force of this phenomenon is the secret behind the Tarot Trump called Death.

Death occurs in so many forms. We experience Death in some form every day of our lives. Loss of job. Loss of a lover. Loss of a friendship. Loss of money or status. Loss of confidence in ourselves ....

Your grief can be the powerful Gnosis which makes you remember that you are the musician. You are the dancer. You are that which has died and entered the Underworld. You are also that which rises re-born bright and shining like the dawn sunrise.

It is the process (because it is a process and not a method) which Flamen Antinoalis Antonius Subia calls HOMOTHEOSIS ... "Gay-Man-God-Becoming-the-Same-As-Gay-Man-God."