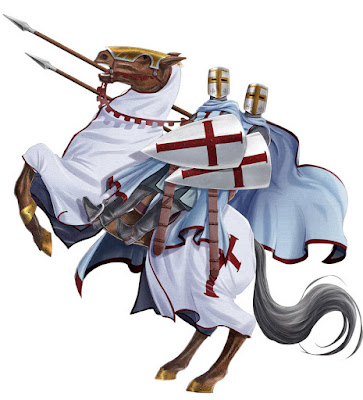 ON this day, the origin of the folk belief that "Friday the 13th" is an unlucky day, the Religion of Antinous remembers the Knights Templar.

The proud and courageous brotherhood known as the Order of Knights Templar, who were sworn to protect pilgrims traveling to the Holy Land, were accused of Heresy, Idolatry and Sodomy, and were arrested on Friday the 13th of October in the year 1310 in France.

Although they had fought valiantly during the Crusades, and even stayed behind, sacrificing themselves to guard the retreat of Christian refugees during the fall of Acre in 1291, the order was condemned by the Pope and handed over to the envious King Philip the "Fair" of France, who coveted their land and immense wealth.

The Knights had adopted the heresy of Catharism which was basically a form of Gnosticism with Manichean influence, that had perhaps been introduced to them in the Holy Land where it flourished under the Moslems.

The Cathars believed that Jesus had descended to the material plane to undo the rule of the God of Israel, and that he had liberated mankind from the law of Moses and the natural order, through salvation in his name.

The Cathars believed that the body, and life itself, was the creation of the Evil One, who claimed to be the "Creator of the Universe."

They did not recognize the authority of the Church and believed that homosexuality was sacred because it was a form of love which did not result in procreation (locking humans in a cycle of earthly incarnations).

Following the Platonic ideal of Venus Urania, the Cathars believed that Brotherly Love was more in keeping Christ's teaching than the love between husband and wife. 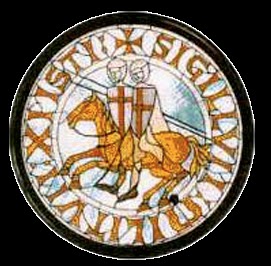 The Knights Templar, whose seal depicted two knights riding on one horse, quite openly advocated this philosophy. But the Papal accusation claimed that they took this to the extreme of sodomy, requiring new initiates to perform the Kiss of Shame, by which they kissed the buttocks and phallus of the Grand Master of the Order.

They were also accused of abandoning Christianity and worshipping a demon called Baphomet, a hermaphroditic, goat-headed idol whose name implied secret knowledge.

Other accusations were leveled against the Knights. But Heresy, Satanism, and Sodomy were the crimes which essentially led to their downfall.

Of course most of this information was obtained through torture. But one can only wonder at the consistency that characterizes their confessions.

On this night, the Grand Master Jacques de Molay and thousands of  Templars were arrested, tortured, condemned and subsequently Burned at the Stake. From then on, Heresy, Devil worship, and Homosexuality were indistinguishable in the eyes of the Inquisition, perhaps because they were indeed interconnected.

Homosexuality, however, had not been a significant threat to Christendom until it was connected with a diabolical plot to overthrow the order of society and of the Church. This was the beginning of Our Burning Times, and over the course of the next 400 years, thousands of homosexuals were officially and publicly condemned and burned or otherwise executed as an act of faith that, through our extermination, the Church was protecting the world from the Forces of Evil which we embodied.

For their courage and sacrifice, we praise the Order of the Knights Templar as Heroic Martyr Saints of the Religion of Antinous, as the Sacred Band of the Middle Ages, and we recognize their secret god Baphomet as an incarnation of our beloved Dionysus, a manifestation of Homo Deus, and of Our Beautiful God Antinous.