WHAT COLOR HAIR DID ANTINOUS HAVE?
By Flamen Antinoalis Antonius Subia 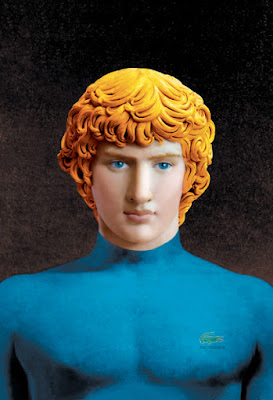 Amidst all the reconstruction faces of Antinous showing him with sandy or blond hair, Antonius Subia has written this explanation for why Antinous must have had dark hair:

Antonius Subia: The Curium Hymnus inscription from Cyprus describes Antinous as “purple-haired” which seems to imply that his hair was dark...it is the only description of his appearance that has been discovered.

One day people will stop portraying him with blonde hair...but it’s gonna take a while I guess...it just doesn’t look or feel anything like him to me...but again...Antinous can manifest in any color he chooses now that he is a god.

The inscription is Greek, I checked the text again and it literally says “Dark Haired”

This is the line:

Those are the only two descriptions of his appearance anywhere in the ancient texts...this is why I am quite sure he was dark haired with reddish brown highlights in the sun...the Purplish description I think is a poetic way of explaining the glimmer and texture of his beautiful hair...the poet may have actually seen him in life and was struck by his amazing hair.

There are those keep saying hopefully one day there will be proof of what he looked like...well here it is and it says he was Dark Haired.

Antinous did not use hair dye, good grief, and the word “red” is completely misleading...the “red” traces of pigment discovered on his statue were not “red” ... they were brown, a natural earth pigment like burn sienna.

I don’t know why they called it red, its not red and it was faded from its original color which was mostly likely darker brown, I’ve seen it, it looks like someone spilled coffee on the statue and couldn’t get it out of the cracks.

Antinous did not have Red or Auburn hair, or brown hair with auburn highlights, if he did the poet would have said that, but he didn’t he said “Dark Haired” which is exactly what it sounds like Dark Hair, no one has ever described red, brown or auburn hair as Dark Hair.

The word porphyry in ancient Greek refers to a whole range of purple colors including blue-purple violet like the spectrum color.

I am sure the poet does not mean that his hair was the color of Porphyry stone and definitely not the Tyrian Purple from the murex snail.

If it is a description of his hair, I think it means that his hair was so DARK that it was purple, the way that we call the darkest shades of black hair, so dark that they are blue.

When the poet says porphyry he (or she) may have meant blue-purple dark hair, but definitely a natural dark color or actual hair. The word Porphyry may not even be describing a color because it also implies Imperial Granduer which Antinous may have displayed.

The “purple-to-the-eye” may refer to his aura and bearing and not mean his hair at all.

Bottom line...the one thing it clearly says it that Antinous was Dark Haired.

By contrast, earlier in the poem it described Apollo as “Radiant Haired”.

That is an important contrast, Apollo, who we know is blonde is described as “radiant hair” while the same poet described Antinous as “dark-haired” “purplish”.

That is a very clear difference. Red or auburn hair is always described by ancients as fire or flame or something that implies heat or warmth not that different from Apollo’s radiant blonde hair...but Antinous is Dark and Purple but not burgundy or maroon these are not natural human hair colors.

His hair was so dark it was purple ... I think this is so wonderful and beautiful.

~ ANTONIUS SUBIA
Posted by Hernestus at 12:00 AM