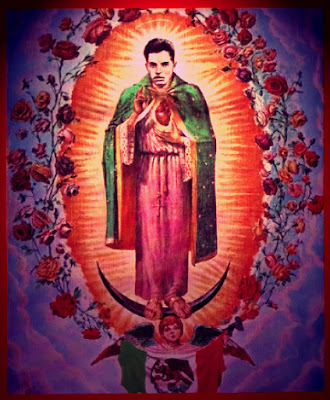 ON October 18th  we honor a gay man who is adored as a saint by millions of people in Mexico.

El Niño Fidencio, Saint of Antinous, was a Mexican "curandero" (male witch healer or shaman) in the 1920s and '30s who is regarded as a saint by his modern-day followers (although he is not recognized by the Catholic Church) and who depicted himself in drag as the Virgin Mary.

His millions of believers point to the fact that he has been credited with innumerable healings and other miracles. He is credited with saving countless lives and with curing incrable ailments.

His millions of believers also point to the numerological phenomenon that he was born on October 18, 1898, and he died on October 19, 1938.

The story of El Niño Fidencio also has many parallels to the story of the Magnificent Religion of Antinous.

Like ANTINOUS THE GAY GOD after deification on the banks of the Nile, El Niño Fidencio was a winsome young man beloved by all who worked miracles along the banks of a great river (Rio Grande) flowing through the barren wasteland of a desert between two lands, the US and Mexico.

The Ancients believed Antinous worked miracles in the lives of his faithful followers. Antinous healed the sick, he granted people love and prosperity, he shielded them from peril.

The oracle priests of Antinous could intercede with the God, or followers could appeal directly to Antinous:

"There is evidence of oracles at Tarsos and perhaps at Rome itself," Lambert writes. "No doubt it was through these pronouncements and visitations that he wrought miracles and healing for which he evidently became famous in the east."

There is the well-documented case of a man named Serapamon who lived in Antinoopolis in the 3rd Century and who called on the priests of Antinous for a love spell to attract a certain woman named Ptolemais. Clearly, his followers truly believed he could work miracles for those who believed in him.

Lambert points out: "The frequent use of his medals as talismans or amulets demonstrates demonstrates a widespread faith in his powers in Greece, Asia Minor and Egypt."

Lambert makes it clear that, for early followers of Antinous, there was no doubt in their hearts or minds that he could work miracles — and did so on an everyday basis.

"Indeed," Lambert goes on to state, "the popular vigour and genuine conviction of the 'belief' in Antinous were widespread and persistent enough to provoke the scorn of some sophisticated pagans and the anxious and unremitting indignation of most Christian apologists for two and a half centuries to come."

We should remember the heart-felt faith of the early followers of Antinous, who knew Him to be their salvation. We should remember their undying faith when we honor El Niño Fidencio in the face of the "anxious and unremitting indignation" of Catholic clerics to this day.