THE FOUR LAYERS OF ANTINOUS, PART 3
By Our Priest Michaelus Isom 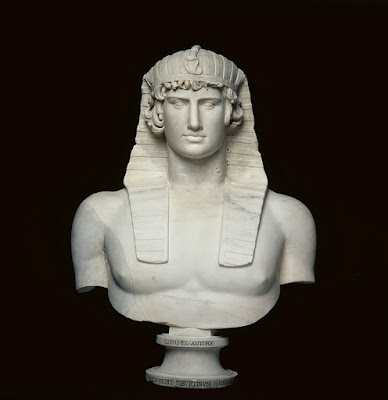 Lambert in his book says: “Of 53 of the 115 sculptures of him he displays the attributes of the greater gods of paganism and of the 20 cities issuing coins associated him with them.”

Antinous was the new Hermes to the Dionysiac artist of Rome. In Ostia the devotees said he sat with the gods of Egypt. In Adramyttion he was Iacchos-Antinous. There was a widespread and deliberate identification with certain gods.

Even though Antinous may be subordinate to the main god, he still retains his own identity possessing a godly character more sharply characterized than the god he was link to.

Not only was Antinous a True God but a Pure God. A full divinity in his own right. As Pure god he appears on coins throughout the empire, twice on the obelisk, and to the Christians as well as in the words of Pausanias.

Even though Antinous did not rank with the twelve original gods of Olympus or the major deities of Egypt, he is showed on the obelisk as a junior god interceding with the greater deities of the Nile. All the while Antinous keeps his same godly personality and possess full divinity.

Antinous is the True Pure God.