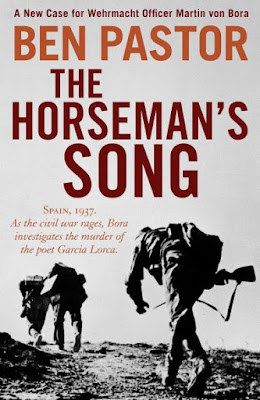 WE all know that Spanish poet (and saint of Antinous) Federico García Lorca was murdered by Fascists on August 19th, 1936 ... or do we?

In a brilliant new thriller by author BEN PASTOR he was murdered twice ... once in 1936 and again in 1937 ... and it is up to a persistently thorough German Wehrmacht sleuth to find out what really happened ... and why.

Antinomaniacs are familiar with Ben Pastor for her richly researched historical novel THE WATER THIEF is about the search for the Lost Tomb of Antinous by Roman sleuth Aelius Spartianus.

In that book, Spartianus not only discovers the whereabouts of the Beauteous Boy's tomb, but also uncovers a nefarious plot to bring down the Roman Empire.

Ben Pastor has written a series of Spartianus mysteries set in the days of the Roman Empire.

But the award-winning Italian-American historian and mystery writer is also the author of a series of novels about a World War II German military detective named Martin Bora who dodges mortar shells and Nazi intrigue to get to the bottom of baffling murders at the risk of life and limb.

The new novel is entitled THE HORSEMAN'S SONG, a reference to García Lorca's celebrated poem Canción del Jinete (The Horseman's Song) about a young rider galloping through darkness on a journey that ends in death. 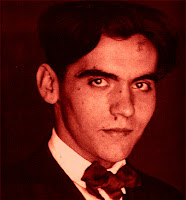 Pastor skillfully works this symbolism into this tale of a young Scottish-German officer walking a tightrope of death between Spanish Fascists and Red Republicans ... all grimly intent on annihilating each other ... as German military intelligence spies lurk in the shadows.

And along the way he must side-step booby-traps placed by envious officers, enamored gay comrades, jealous rebels ... and the love spells of an Aragon bruja witch.

As always with every book by Pastor, the historical research is immaculate and the writing is tight and fast-paced. You can't skip over a single sentence lest you miss a vital clue or insight into the solving of the riddle.

For those of you who have read her earlier Martin Bora novels, all set during World War II, this book is something of a prequel, introducing us to a Martin in his late 20s ... younger and more naive ... a young man galloping on his own journey through dark shadows of death.

It's a book everyone who is interested in Federico García Lorca must read.