THE FOUR LAYERS OF ANTINOUS, PART 1
By Our Priest Michaelus Isom 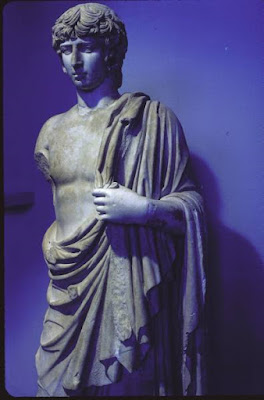 SO, what do you know about Antinous? I am sure you know the basic history since you are a part of this group. He was a young man, an Ephebe who was a part of the inner circle of the Roman Emperor Hadrian. He was the lover of Hadrian and accompanied him on his tour of the empire and lost his life after drowning in the Nile. So, what is your relationship with Antinous? Do you ever speak to him? You may light a candle or burn incense from time to time. But, stop and think and take a minute to really look on him and how you treat him. Granted in this 21 century we are occupied and consumed with so much and busy all the time. I know I am guilty as well. Do you know what makes Antinous so special or different from all the other gods? He was human, a man like us today and like those in the 2nd century A.D.

Royston Lambert’s book Beloved and God, it discusses how Antinous never gave up his human form and personality in his divinity. In fact, his humanity comes through even more. The godhead of Antinous according to Lambert’s book takes on four forms or layers. I want to take the next few days to discuss each of these layers. Each layer is theoretically distinct, but also interconnected.

The first layer we see is the Diving Ephebe. The word ephebe is a term for an adolescent male. In the ancient Greek society and ephebe was a boy age about 17-18 who went through a period of initiation that included military service. Also, in ancient Greece they saw that an innocent youth displayed a spiritual element. This is what I think we see in Antinous as the Divine Ephebe. Antinous sought spiritual knowledge. It’s almost as if there was an insatiable appetite for this spiritual knowledge. I am not saying that anything wrong in fact this make him all the more to love. The wide-eyed boy looking for spiritual insight and growth; and an Emperor who has this same appetite sought this together. We know that both Antinous and Hadrian participated and were initiated in various mysteries. Can you imagine the emotions that Antinous experienced during his time with Hadrian? The anticipation, the fear of the unknown and the joy. Antinous wants us, yes you and me to have that same wide-eyed youth seeking spiritual knowledge. We may not be an Ephebe but, we can be in our hearts. I challenge each of you reading this to take time to really know Antinous.

MICHAELUS
Priest of Antinous
Posted by Hernestus at 9:00 AM