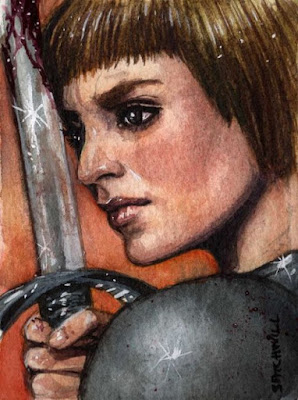 Joan of Arc said she conversed daily with Saints Catherine and Margaret and St. Michael the Archangel. Her greatest victory was the liberation of Orleans, where Charles, then Dauphin, was crowned as King of France.

She was later captured by the English and subsequently tried by the Church and burned as a heretic. The focus of her trial was upon the nature of her visions, which the inquisitors condemned as Demonic, and upon her refusal to wear traditional women's clothing.

Joan of Arc was in essence the most courageous of all who defy gender stereotypes, whose insistence upon male dress and hair style, and occupation as a warrior was the excuse used by the Church for her condemnation and subsequent burning as a heretic. The Church however reversed this decision in 1909 by beatifying her, and then finally consecrating her as a saint in 1920.

Though she is a saint of the Catholic Church and a devoted Christian, it is for her gender stereotype-defying courage that she is included as a Heroic Martyr Saint of the Religion of Antinous.
Posted by Hernestus at 9:00 AM