ANTINOUS MAY HAVE SEEN THIS TEMPLE
UNEARTHED NOW IN HELIOPOLIS EGYPT 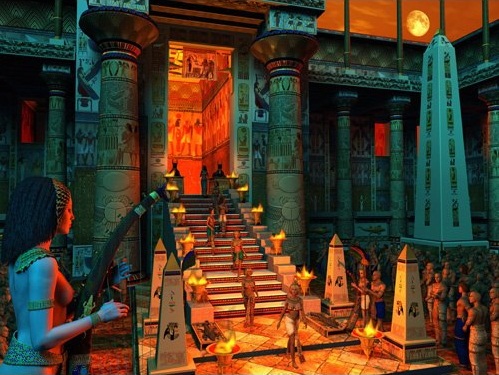 A new discovery at a temple in Egypt which Hadrian and Antinous visited has revealed clues to the mysterious last native-born pharaohs of Egypt: Nectanebo I and his stepson Nectanebo II ... the legendary father of Alexander the Great.

A German-Egyptian team of archaeologists unearthed a sanctuary to Nectanebo in the temple precinct of Heliopolis.

It was there that Hadrian, according to historian Royston Lambert, may have cast a magical spell that rebounded and resulted in the death of his beloved Antinous.

During that fateful final trip up the Nile, just weeks before Antinous died, it was said that Hadrian and Antinous stopped at Heliopolis. 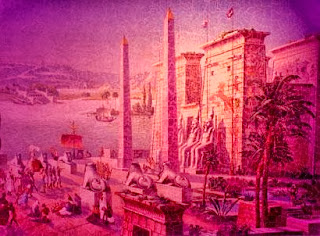 That is the town near Mennefer (Memphis/Cairo) where the Egyptian magician/priest Pancrates gave to Hadrian (or rather sold to him for an exorbitant sum) a magical spell which could bind another man's affections to him forever ... when the spell was cast properly.

If cast wrong, the spell would result in the death of the other man.

There was some speculation in ancient times as to whether the death of Antinous may have be related to this strange Egyptian spell.

Whether we believe in the efficacy of Ancient Egyptian Spellcasting, Hadrian most certainly DID believe in magical spells.

Assuming Hadrian cast the spell a few days or weeks prior to the death of Antinous ... that would certainly explain his inordinate grief at the Blessed Boy's death and his penance in declaring Antinous a god ... perhaps out of a profound sense of guilt. 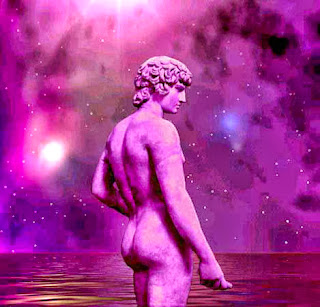 The temple precinct of Heliopolis was steeped in magical lore and Nectanebo and his stepson were the focus of many legends.

King Nectanebo or Nektanebos I (Nekhetenebef Kheperkara, may he live forever!) was an army general who became pharaoh and founder of the last native dynasty of Egypt, the thirtieth.

Nectanebo was a great builder and restorer, to an extent not seen in Egypt for centuries.

Nectanebo is very well known for the splendid "retro-style" monuments he
erected throughout Egypt, carefully copying the "Classical Middle Egyptian" style of the 12th Dynasty when Egyptian art and literature were at their peak.

The 30th Dynasty marked the final blooming of Egyptian art ahead of a long and inexorable decline in workmanship and artistry in succeeding centuries.

Nektanebos is especially for the many sphinx avenues he laid out in front of temples. 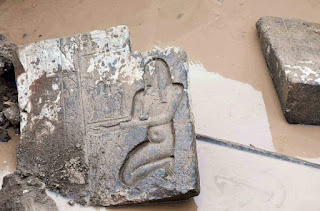 Now Mahmoud Afify, head of the ancient Egyptian antiquities sector at the Egyptian Ministry of Antiquities, has announced the discovery of a sanctuary of Nectanebo I (380-363 BC) in the temple precinct of Heliopolis.

According to a report in ANSAmed, the building was constructed with limestone reliefs and columns, and had lower wall zones made of black basalt. Aiman Ashmawy, head of the Egyptian team, added that the eastern gate was made of brown silicified sandstone and decorated with inscriptions and ritual scenes.

The team also unearthed a bronze figurine of the goddess Bastet, basalt slabs carved with images of Nile gods and accompanying texts, and sculptor's practice pieces.

Researchers from the University of Leipzig/Germany have also uncovered a workshop dating from the 4th century BC in the south-east of the temple precinct as well as a new possible temple site of Ramses II, evident by fragments of a colossal statuary and large blocks with wall relief. 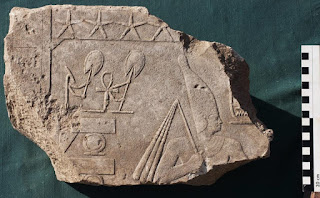 His stepson Nektanebos II is also well-known as a sorceror-king who, when the Persian fleet was bearing down on Egypt, used effigy model ships in a tank to cast magical spells that destroyed the invading forces at sea before they could reach the landing beaches.

In the eyes of the Egyptians, he was their last great king prior to the gradual descent into serfdom under the Persians, Greeks and, finally, the Romans.

Nectanebo II was ultimately defeated and, in the summer of 342 BC, Artaxerxes entered Memphis/Heliopolis, where the Persians installed a satrap.

Nectanebo fled to Upper Egypt and finally to Nubia, where he was granted asylum. He, however, preserved a degree of power there for some time. With the help of Chababash, Nectanebo made a vain attempt to regain the throne. 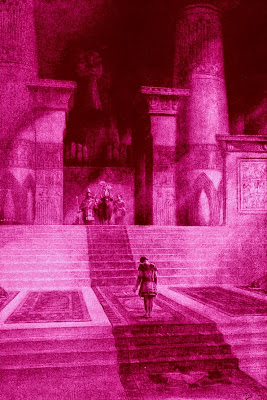 Soon after Alexander the Great's godhood was confirmed by the Oracle of Zeus Ammon, a rumor was begun that Nectanebo II, following defeat in his last battle, did not travel to Nubia but instead to the court of Philip II of Macedon in the guise of an Egyptian magician/priest.

There, while Philip was away on campaign, Nectanebo convinced Philip's wife Olympias that Amun was to come to her and that they would father a son. Nectanebo, disguising himself as Amun, slept with Olympias and from his issue came Alexander.

This myth would hold strong appeal for Egyptians who desired continuity and harbored a strong dislike for foreign rule.

Hadrian loved tales of mystery and magic and … as pharaoh of Egypt himself … no doubt was very familiar with the legend of Nectanebo, the magician/pharaoh who was the father of Alexander.

Posted by Hernestus at 1:53 PM