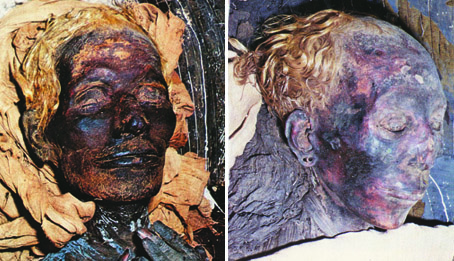 SOME Egyptians were natural blondes, according to an Australian researcher, whose findings are bound to raise the eyebrows (blonde or otherwise) of many people who insist all Egyptians have always had dark hair.

There have always been a few researchers who speculated that some ancient Egyptians must have had blonde hair, based on mummies and tomb wall art.

Hitherto it has been assumed that some stylish Egyptians dyed their hair with henna or bleached it to produce auburn, ginger and red hues. 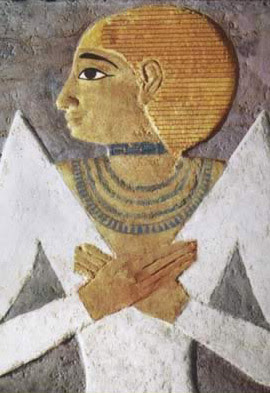 Many other egyptologists believed the hair had lightened during the mummification process.

But now forensic Egyptologist Janet Davey says modern DNA testing proves that the blonde locks, brows and eyelashes on the mummified remains of ancient Egyptian children were natural ... not bleached.

Elliott prepared a quantity of synthetic natron, a kind of salt used in the mummification process to dry out the remains.

Dr Davey then took 16 hair samples and covered them in the salty powder for 40 days, the same amount of time the ancient Egyptians took to dry out the bodies with natron.

The hair samples selected were dark, with one grey and one fair specimen for comparison. They came from male and female donors aged four to 92.

Dr Davey also used hair with henna on it, given this was used as a dye by the ancient Egyptian embalmers including those who worked on Ramesses II following his death, aged 90.

When the samples were removed from the salty powder, they appeared unchanged.


To confirm this, Dr Davey called on the expertise of Gale Spring at RMIT who carried out microscope analysis ... which showed no change. 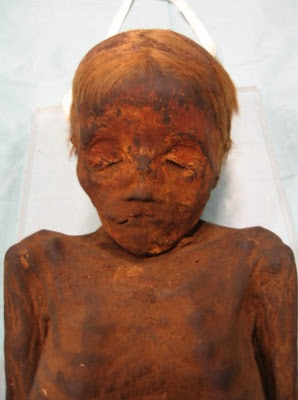 "The general public and a lot of egyptologists think that the ancient Egyptians had very dark brown or black hair," Dr Davey said. "But this shows there were fair-haired Egyptians."

She said fair-haired mummies were rare: she has seen just four in her research career.

This was perhaps why it was widely believed that the fair locks were a result of the mummification process.

However, Dr Davey said, she was now convinced that there were blondes dotted among the ancient Egyptian population during the Graeco-Roman period, which spanned from 332 BC to around 395 AD.

She said it made sense. The child mummies had fair hair because they lived during the rule of the Greeks and the Romans. This era would have brought many new genes into Egypt, via the Northern Greek and Roman soldiers as well as traders and slaves who may have had northern European genes.

"Some ancient Egyptians could have been blue-eyed blondes or brown-eyed blondes," she said. "I wouldn't say ancient Egypt was multi-cultural like Australia today but certainly there were various mixes."