EVEN A BROKEN ANTINOUS BUST
GETS 10 TIMES THE ASKING PRICE 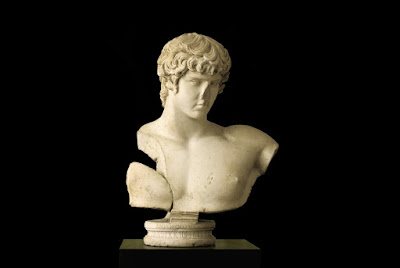 It proved anew that Antinous sells ... that any Antinous-related artefact is guaranteed to fetch a fortune ... even if it is in a ruinous state as this fractured bust was.

But his name was incised on the pediment, making this bust unique in art history.

The "white glove" sale achieved a total of $36,769,250, far exceeding the high estimate of between $6/9 million. Proceeds from the sale benefited the charitable foundation established by Mr. Day.

The marble portrait bust of the Deified Antinous is the only known Classical representation of Antinous, outside of his coin portraits, to be identified by an inscription.

Auctioneer Hugh Hildesley opened the bidding at $900,000 and two clients in the room and one on the phone began to battle.

The winning bidder, a European collector, entered the fray at $6.5 million and prevailed against the three existing bidders as well as another client who only joined the competition at $11.2 million. In all, it took more than eleven minutes for the bust to sell, and when the hammer finally fell the room broke out in applause.