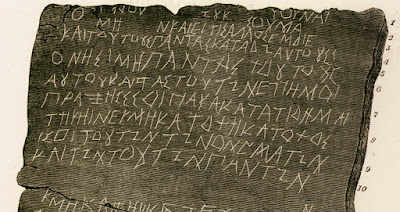 FIVE lead tablets that cursed tavern keepers some 2,400 years ago have been discovered in a young woman's grave in Athens, Greece.

Four of the tablets were engraved with curses that invoked the names of "chthonic" (underworld) gods, asking them to target four different husband-and-wife tavern keepers in Athens.

The fifth tablet was blank and likely had a spell or incantation recited orally, the words spoken over it.

The tablets were skillfully incised with pristine lettering, indicating that the person who prepared them was very skilled and learned in making such curses.

All five tablets were pierced with an iron nail, folded and deposited in the grave. The grave would have provided the tablets a path to such gods, who would then do the curses' biddings, according to ancient beliefs. 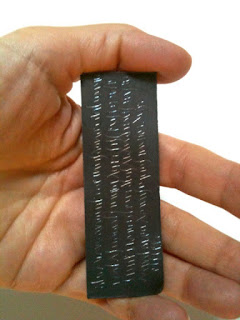 One of the curses targeted husband-and-wife tavern keepers named Demetrios and Phanagora. The curse targeting them reads in part (translated from Greek):

"Cast your hate upon Phanagora and Demetrios and their tavern and their property and their possessions. I will bind my enemy Demetrios, and Phanagora, in blood and in ashes, with all the dead…"

"I will bind you in such a bind, Demetrios, as strong as is possible, and I will smite down a kynotos on [your] tongue."

The word kynotos literally means "dog's ear," an ancient gambling term that was the name for the lowest possible throw of dice ... thus cursing the tavern with bad luck.

Lead curses were very common in Ancient Greece and Rome. A virulent curse would be inscribed into a thin sheet of lead which would then be folded up, preferably with hair or nail clippings or some other personal items from the target subject.

And then the lead packet would be secreted in or near the subject's home, under the bed being the best place.

Or if that was not possible (due to distance or enmity), then the lead  curse could be thrown into a well or a river or some other place ... or in a freshly dug grave ... as close to the underworld as possible so that the gods and demons of the underworld could carry out the magical spell.

Because of the fact that they were safely deposited at the bottom of wells or graves or pits, there are lots of surviving lead curse sheets, which experts call lamellae.

Lead is a marvelous base metal which is pliable to suit all sorts of uses ... both mundane and religious/magical. Gold, silver, copper and lead also had magico-religious significance. 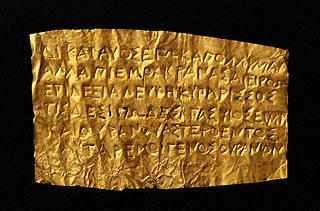 Gold and lead, in particular, were so soft and malleable that they were good for casting prayer spells. Religious prayer spells would be meticulously incised into thin sheets of gold or silver or copper foil (called lamellae) which were then placed inside amulets, or else rolled up and worn as pendants around the neck.

Very often, these lamellae were placed under the pillow so that you the petitioner could receive dreams from the God (as mentioned in the OBELISK OF ANTINOUS) or else could send dreams to a loved one.

In many cases, these lamellae were "demon redirection" talismans. They called upon evil demons to go elsewhere. There is a famous gold lamella found in Romania which says: "Demon hanging over me in this place, go and do your hanging at Julia Cyrilla's house. Do this for me. Now! Now!"

If you can't banish a demon, then perhaps you can persuade it to go elsewhere where it will have even more demonic fun than it does with you. 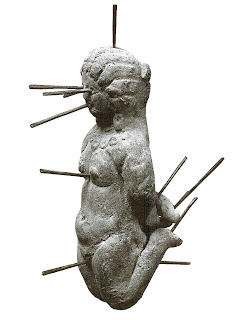 As you can see from the little clay figure with the pins stuck in all its orifices -- it is hard to distinguish whether the subject of the spell was being blessed or being cursed with love.

Hadrian was fairly obsessed with magic and oracles and portents and potions.

And we know that, during the imperial tour of Egypt, an Egyptian magician/priest sold the emperor a spell which would cause a man to be drawn irrevocably to him forever or which would possibly kill the man -- depending on the dosage of the potion and the intonation of the words.

It was said that Hadrian wanted proof that the spell really worked, so the magician/priest used the spell to cause a man to collapse and wither and die before his very eyes.

We must stress, however, that there is no historical record of Antinous ever being called upon to curse anybody. On the contrary, there is much evidence that he was called upon to bring love and health and prosperity to his followers.

The Obelisk inscription assures us that Antinous "sends healing visions" to his followers as they slumber.