ROME'S POLICE FIGHTING IN THE STREETS
WITH ANCIENT ROMAN CENTURIONS 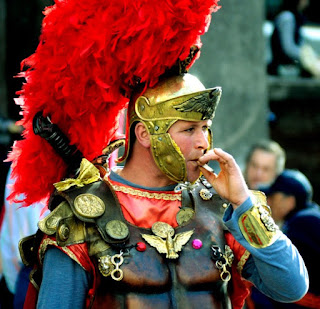 IF you assumed Italy had long seen the last of Ancient Rome’s legions, think again.

More than 1,500 years after the Roman Empire’s reign over the West, its foot soldiers have returned to fight in the streets again ... but this time they're fighting with Rome's police force.

Outside the Colosseum last week, authorities conducted an undercover operation intended to tackle a league of centurion pretenders, who have become a serious nuisance to tourists.

In recent years, the space outside Rome's Colosseum (the Flavian Ampitheatre) has increasingly been thronged by men dressed in ancient Roman military garb, posing with tourists for tips.

People enacting kitschy re-runs of Rome’s history for the non-local crowd seems a pretty harmless addition to the usual gamut of tourist industry hangers-on, but visitors have been complaining. 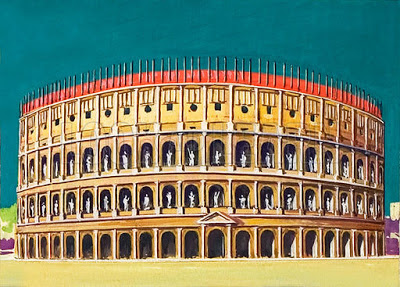 The centurions (so named because they were officers each responsible for 100 legionaries) have been hustling tourists pretty hard, only taking the third or fourth "no" for an answer when offering their posing skills.

They have occasionally been aggressive, a behavior their costumes only amplify.

It can be pretty intimidating being roared at by a plumed, breast-plated man armed with a GLADIUS, even if the weapon turns out on closer inspection to be made of papier-mâché.

Getting rid of them has proved tough. Uniformed police officers are no less visible than legionaries, and the centurions have always succeeded in making a tactical, if not especially courageous retreat, warned off by scouts via that essential bit of Ancient Roman military hardware ... the cell phone.

It seems the slightly fearful impression the fake soldiers give isn't entirely misplaced.

When plain-clothes officers swooped on a clutch of them this week, they fought back, with one centurion charged with punching a police officer.

While the Colosseum's Roman re-enactors might have been more aggressive than most, this sort of clampdown is a growing trend across Europe.

In 2014, Berlin barred street performers from the area around the Brandenburg Gate, successfully making what is an imposing but still dull space even duller.

The director of London's National Gallery is also currently trying to shoo the assembled Yodas and Wookies from off its front steps.

A tiny minority of these performers are indeed a bad lot.

In 2011, a living statue performer in London was given four and a half years in prison for hitting a rival with a bagful of bricks. Most, however, do little harm, and even help spread a little visitor money away from major chains and institutions and toward individuals.

It's understandable that Rome doesn't want the ghosts of its past to hector tourists for their spare euros — but a city where no anarchic performance is allowed at all could be a pretty dull place.