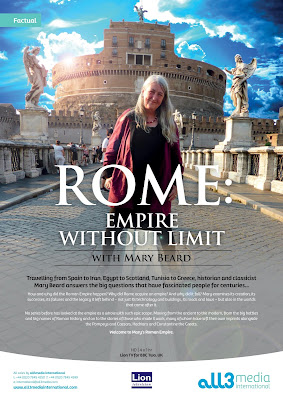 It is a four-part series entitled "Mary Beard's Ultimate Rome: Empire Without Limit" and debuts 27 April at 9 p.m. British time on BBC2.

Outside Britain you can watch it on your computer.

Just calculate the time difference and click on FILMON.COM and do a search for "BBC2."

Mary Beard has come in for controversy lately because she rebuffs people who say she should get a style makeover and dye her hair.

She is currently embroiled in a controversy on Twitter because she said she does not believe universities should be a "safe place" for post-traumatic victims of abuse.

For example, some people have urged that colleges and universities refrain from teaching Ovid's Metamorphoses (which are full of Zeus raping innocent mortals of both sexes) and from staging Shakespeare's plays (because of murder, incest, child abuse, etc.).

Thousands of people have barraged her with criticism on Twitter, calling her "a fat old Tory Fascist pig" among other things ... and she reads each comment and responds ... and gets very upset.

So we have tweeted in support of her ... after all: Antinous is on Mary Beard's list of "Ten Best Ancient Romans."

The blogger, TV host and scholar ranks Antinous at Number 7 ... below Caligula and Empress Livia, but above Ovid and Cicero.