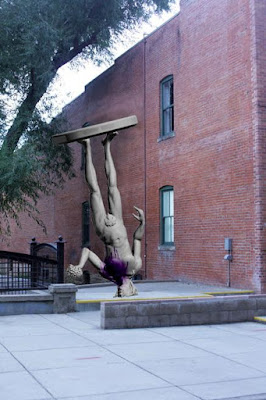 A four-meter statue of Bacchus, the Roman god of wine and intoxication, flipped on its head and splattered with acrylic paint, is being installed outside the Museum of Contemporary Art in Boulder, Colorado.

The sculpture, by Denver artist Dmitri Obergfell, is titled "Go Home Bacchus, You're Drunk" and will stand for one year.

The space has been host since 2003 to a wooden sculpture by Jerry Wingren, which will be returned to the artist when the new piece is installed.

Obergfell said his upside-down Bacchus ... made from fiberglass-reinforced concrete ... is about political symbolism of toppled statues.

The sculpture installation coincides with rampant destruction of sculpture and architecture by DAESH Islamic State hooligans.

"I really wanted to do something that was just sort of a splash of paint, but I didn't want to put any political slogans or anything like that, because I'm more interested in the toppling," he said. "I really want people to consider these sorts of gestures."

Obergfell's work is the first in a series of temporary outdoor sculptures that BMoCA intends to roll out in coming years. 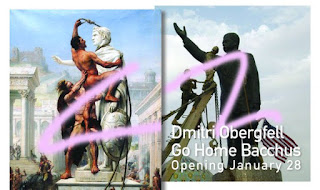 "It's work that we're putting into the conversation in a more outward, forward-facing way than we do with our exhibitions housed inside the museum," curator Mardee Goff said.

"This is a more direct line to the public. We're looking forward to sparking a new dialogue about works of art in communal, public arenas."

The Bacchus statue will be sprayed with paint from a fire extinguisher, Obergfell said. While that may give some passersby the impression that graffiti from the public is encouraged, it's not, Goff said.

But that's not say that viewers can't interact with the piece in other ways.

"The whole idea," Goff added, "is to open up a dialogue that welcomes responsible criticism, and to foster an active public discourse around this. You may not like what is presented. You may love it."

After its one-year term, the sculpture will be sent to the Rocky Mountain College of Art and Design ... Obergfell attended the school 10 years ago ... for permanent display.