GOOD NEWS: WE FOUND YOUR SHIPMENT
BAD NEWS: AT THE BOTTOM OF THE SEA! 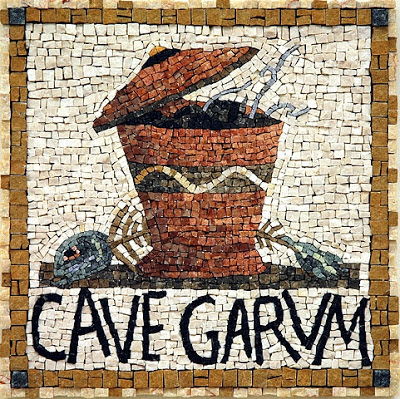 ITALIAN archaeologists have found an exciting Hadrian-era shipwreck off the coast of Italy ... but instead of gold or jewels or antiquities, the boat is full of 3,000 jars of ancient fermented fish sauce.

Who knows? Perhaps the cargo was destined for the Imperial palace in Rome. And perhaps Antinous was disappointed that the cargo was lost at sea ... or more likely, he was delighted that he wouldn't have to eat any of the stinky stuff. 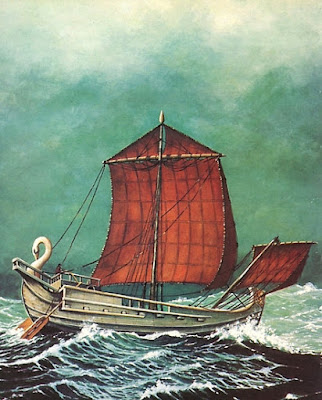 It was called GARUM and it was as ubiquitous on Ancient Roman dining tables as a bottle of soy sauce, Worcestershire sauce, ketchup, Mexican salsa, Thai Nam Pla fish sauce, Australian Vegemite or German Maggi is on tables in modern cultures.

This powerful fish sauce was loved by many Romans, who ladled it over everything they ate ... and absolutely detested by many other Romans, whose stomachs turned at the mere scent of it.

The image above is a spoof mosaic saying "Beware of Garum" (a pun on "Cave Canem" ... "Beware of Dog") but many Ancient Romans no doubt would have welcomed such a warning at a taverna doorway.

Garum was an essential condiment for Romans, both patrician and plebian. It was made by curing chopped and salted fish innards in earthen amphores. These jars were left in the sun for up to three months as the mixture fermented. 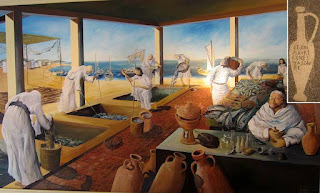 Production of garum was often relegated to areas removed from residential and business districts because the stench was over-powering.

An ancient recipe book even offers advice about how to "reclaim" spoiled garum.

While many Romans dearly loved garum, many other Romans ... and nearly all non-Romans ... truly despised garum. Asking for garum at a noble home in Athens, Antioch or Alexandria was like asking for ketchup in Paris today.

Ancient Roman cuisine had some interesting elements, and one prized product was a condiment called garum, which was made of fermented salted fish intestines.

According to The Local, the ship found off the northeastern coast of Italy dates to the first or second century, and archaeologists were unsure of where the boat might have come from until they realized that it was carrying an enormous load of fish sauce. 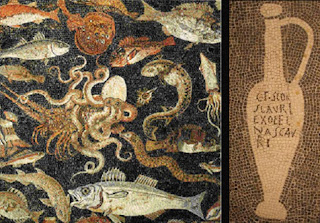 "After we filmed the wreck and analyzed an amphora [clay jar] and some fragments that a robotic craft brought back to the surface, we realized the ship was carrying a huge quantity of fish sauce when it sank," said archaeologist Simon Luca Trigona.

The ship was also carrying some jars of wine, but considering that it and the fish sauce jars are about 2,000 years old, there is probably nothing left of the contents by this point, since it all most likely disappeared into the sea.

The researchers identified the fish sauce by the shape of the jars, and the fact that the boat was carrying fish sauce and wine gave them a good idea of where the boat had come from and where it had been going when it sank.

"She most likely sailed out of Rome along the Tiber and sank a couple of weeks later while making the return journey, weighed down by all that fish sauce," Trigora said.

Posted by Hernestus at 1:44 PM