ANOTHER GAY THROWN TO HIS DEATH
AS LGBT REFUGEES SEEK SHELTER 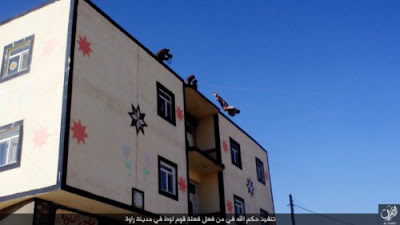 DAESH Islamic State thugs have thrown another gay man to his death in front of a crowd, even as refugees arriving in Germany complain of attacks from homophobic asylum seekers.

The man was executed in the Iraqi city of Rawa after being accused of engaging in homosexual acts.

As the victim was escorted to the top of a tall building by three men, a crowd congregated below. The victim's hands and feet were then bound and he was pushed off the edge of the roof.

Images capturing the execution were posted this weekend by the "ISIS Media office of Euphrates Province."

One caption read: "The execution, as sentenced by God, of the people of Lut in the city of Rawa." Another caption read "Please don't forget to pray for us."

This is at least the 17th man thrown off a rooftop for being gay. Another six were stoned to death, and three were executed by being shot in the head.

At least 26 PEOPLE HAVE BEEN MURDERED because DAESH suspected they were gay, but that number is difficult to confirm and potentially much higher. 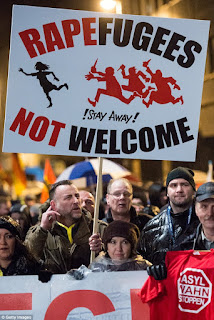 Meanwhile, a group of LGBTIQ university students in Germany have joined forces with gay refugees to counter verbal and physical attack from homophobic refugees.

Leipzig has also been the city where Nazi thugs have staged weekly torchlight processions to protest against the influx of "swarthy swine" as they call refugees from Syria, Afghanistan and other war-torn regions.

The Queer Refugees Network in Leipzig aims to provide support for gay and trans refugees who suffer abuse at the hands of other asylum seekers at refugee centers in Germany.

In some cases, refugees whose sexuality is not demonstrably straight are attacked, sexually groped and physically abused by homophobic refugees. 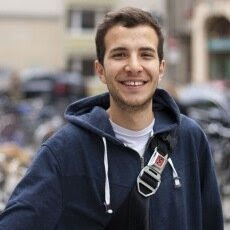 "The refugee center staff are ill prepared for these situations and often play down their significance, which only makes matters worse," says Tarek.

The Queer Refugees Network helps raise the consciousness of center staffers to the problems, and also helps to find off-site housing for gay refugees.

"But our first objective is to offer an ear and a shoulder to cry on for LGBTIQ refugees who find themselves in a strange land," Tarek explains.

Germany has had an influx of one million refugees from war-torn Syria and the Mideast over the past 12 months and an undetermined number of those refugees are LGBTIQ asylum seekers fleeing persecution and death in their homelands.

Organizations in Germany have ISSUED AN APPEAL for Germans to open their homes to gay Syrian refugees who face discrimination from other refugees ... and death threats from radical Islamic militants.

Gay Syrians arriving at refugee camps in Germany say they have been subjected to verbal and even physical attacks from other refugees during the long trek from their war-torn homeland.

While the news cameras focus on families with small children, most of the refugees are in fact young adult males ... and between 5 and 10 per cent are gay or bisexual, according to German LGBT groups reaching out to gay refugees. 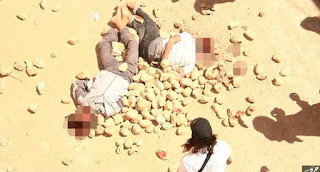 In Syria, they faced the threat of death at the hands of DAESH Islamic State barbarians who have executed scores of gay men ... throwing them from tall buildings and stoning them to death if they survive the fall.

But even after they arrive safely in Germany, gays and lesbians are the victims of homophobia, according to German LGBT groups.

"They shout Koran verses all night and scream that they will kill anyone who stands in their way," a Syrian refugee told ARD television. "A friend of mine was beheaded in Syria, so I am scared out of my wits."

Even less militant refugees are hostile towards LGBT refugees in their midst.

"Right now we are handling the case of a man who is in a refugee camp in Magdeburg in eastern Germany who says he fears for his life," says Mathias Fangohr, head of the Magdeburg Pride Organization.

"He is terrified that if other camp residents find out he is gay he will end up dead," Fangohr says.

"He is totally traumatized from the ordeal he has gone through and is desperate for help," he adds.

The situation is compounded by the fact that many of the support groups are homophobic.

"We have trouble finding Arabic interpreters because many of them refuse to interpret for gays, whom they consider to be filth," he adds. "They won't even mention the word for homosexual in Arabic because it is dirty." 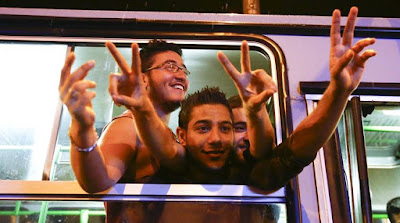 A Berlin group has issued an appeal for gays in the German capital to open their homes to LGBT refugees so that they can avoid homophobic taunts and humiliation at refugee camps.

The group has also launched a program for teaching LGBT refugees language skills and job skills to help them get on their feet in Germany.

With a falling birth rate and declining population, Germany has welcomed the refugees not only on humanitarian grounds ... but also as a boost to immigration.