WEREWOLVES WERE WELL-KNOWN
IN THE DAYS OF ANTINOUS 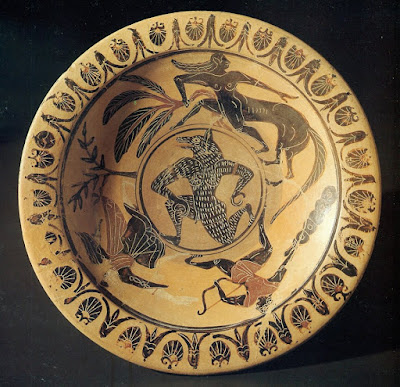 EVEN a man who is pure in heart ... and who says his prayers by night ... can become a wolf when the wolfsbane blooms ... and the Moon is full and bright.

It is difficult to say precisely when the story of the werewolf first developed, but wolf-men were well-known in Greek and Roman times.

The twins Romulus and Remus had been suckled by a she-wolf, and so the idea of the human/wolf hybrid was ingrained in the Roman psyche from an early date.

Shape-shifters were quite common in Greek and Roman mythology.

One of the very earliest depictions of a wolf-man is on an Etruscan Black Figure Plate from the 5th Century BC with decoration representing Hercules pursuing the centaur Nessos in the presence of Deianira ... and at center a wolf-man.

Usually, the metamorphosis from human to animal form often occurred as a direct result of divine punishment ... the gods condemning an individual on the basis of pride, boastfulness or blasphemy. 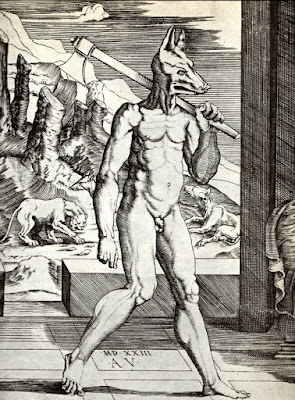 Pliny the Elder described the lycanthropic shape shifting of a man into a wolf by the gods following an act of cannibalism.

Early in the 1st Century AD, the Roman poet Ovid wrote "Metamorphoses," in which which King Lycaon (from whom we get the term "Lycanthrope") offended the gods by serving them human flesh.

Wanting to see if Zeus/Jupiter was truly omniscient, he slaughtered men and served them for dinner.

In return, Zeus turned Lycaon into a man-wolf and killed his 50 sons with lightning bolts. He is shown here holding a wicked meat axe.

Forget the Hollywood full-moon myths ... a werewolf can change at any time ... if the wolf-man has the right clothes! Some ancient myths speak of cloaks or belts which enable a human to become a wolf.

In the "Satyricon," Petronius writes of such a transformation: "And when I looked for him ... I was appalled to see he had stripped off naked and placed his queer garments by the roadside ... whereupon he walked in a circle round the heap of clothes, urinating a protective ring about them upon the ground ... and then ... as I watched in dread ... he transformed into a wolf!"

Emperor Hadrian had a fascination for magic and strange customs ... he must have told Antinous many weird bedtime tales of uncanny things he had heard in his travels.