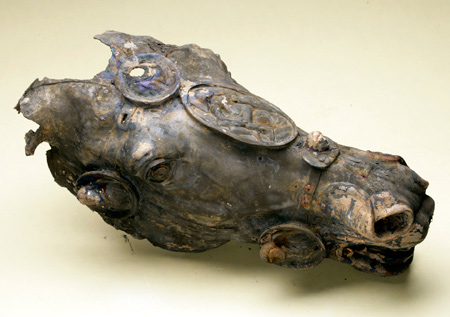 Archaeologists have unveiled stunning pieces of a gilded bronze equestrian statue of Augustus Caesar on horseback which once adorned the central square of a Roman "frontier" town deep inside Germanic tribal territory.

The largest piece is a nearly intact life-size head of a horse cast in bronze and originally gold-plated. Some of the gilding is still visible in the photo issued by the  German Archaeological Institute's Roman-Germanic Commission.

The head is richly detailed with an ornate bridle studded with medallions in honor of Mars, Nike and Jupiter. Smaller pieces found nearby indicate the bronze horse supported an Imperial rider, most likely Augustus. 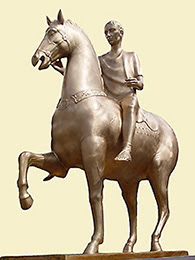 The statue was the focal point of a town more than 160 kms (100 miles) deep inside Germanic territory which was a staging point for Roman expeditions aimed at colonizing and civilizing the region they dubbed Germania Magna (Greater Germany).

Experts who have been working at the site for 15 years have long believed that a great statue of Augustus on horseback was located in the strategic town, far east of the Rhine and north of the Danube.

The town sported marble-clad temples and was a major trading post, according to pottery sherds and coins which have been found, dating from 5 BC to 9 AD, the year of Battle of Teutoburg Forest.

It was in 9 AD that Germanic forces under Arminius annihilated three Roman legions led by Publius Quinctilius Varus. The crushing defeat left Roman cities to the west in Gaul totally undefended. Augustus dropped his plans for colonizing Across-the-Rhine Germany, forever changing the course of European history. 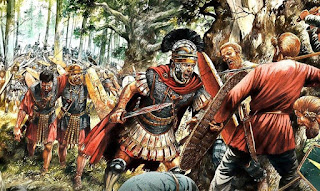 The dig site is about 100 kms (80 miles) south of Teutoburg Forest.

The gilded-bronze horse head was found at the bottom of the town's central well.

That leads experts to believe that triumphant Germanic warriors captured the town and pulled down the statue.

In keeping with Germanic religious rites, the horse's head was ritually "drowned" in the well so as to appease the totemic cult of the horse. The rest of the statue was smashed to bits.

Presumably, the Romans would have removed the splendid statue and transported it back across the Rhine, had they been able to do so. The shattered remnants are seen as proof of sudden chaos after the Teutoburg Forest military disaster. 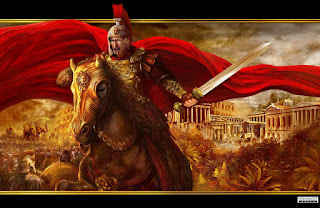 The sprawling site, near the modern village of Waldgirmes, indicates that the Romans had planned for this town to grow into a major civitas administrative center.

But it was left unfinished by the Romans, who used it only as a staging base for punitive expeditions and evacuation of Roman civilians after 9 AD, according to the German archaeologists.

The finds suggest that this was intentional: between AD 9 and 16, during the period of Roman punitive expeditions, the site was occasionally used as a military camp. After that, it was destroyed either by the retreating Romans, or by the advancing Germanic hordes.