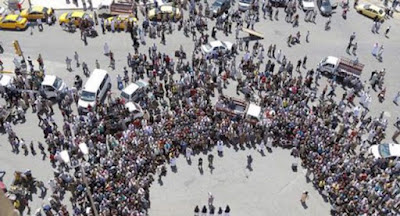 YET another huge crowd has gathered to watch DAESH Islamic State barbarians execute a man accused of being gay – some even brought their children.

The man, accused of being gay, was thrown from a high building.

He was first led out by two ISIS killers, who carried out the execution, and was “found guilty” by a man posing as a judge, wearing a mask. 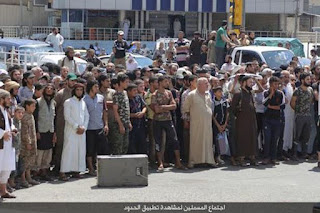 The photos, which show a crowd of hundreds, some with children, were the latest to be released by ISIS.

They show the victim being led to the top of the building, and then his body at the bottom.

Only two days ago, DAESH released a video showing two men accused of being gay THROWN OFF A BUILDING and then stoned by a crowd in Palmyra, a city visited by Antinous.

Only a few weeks ago, more than 25 men were EXECUTED BY CHILDREN at the famous amphitheater in Palmyra.

Posted by Hernestus at 4:36 PM