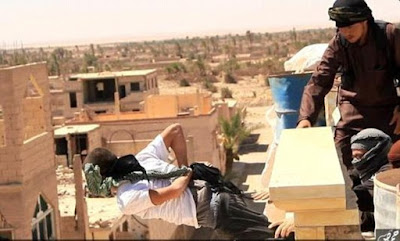 YET another video has been released by DAESH barbarians showing the brutal execution of two men accused of being gay.

The latest video, shot in Palmyra, Syria, a city which Antinous and Hadrian visited, shows two Syrian men be thrown off a building before being stoned to death.

Only a few weeks ago, more than 25 men were executed by children at the famous amphitheatre in PALMYRA. 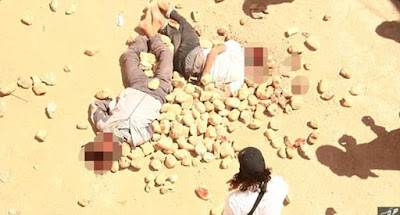 According to local journalist Zaid Benjamin, the men were accused of “having a homosexual affair”.

Images shared on social media showed the two men being led to the top of the three-storey building as their judgement was read out by an ISIS member.

As with other videos released by the terrorist group, a large crowd of local residents gathered around to see the incident.

The terrorist group, which operates predominantly across Syria and Iraq, is notorious for filming videos in which captives – usually Westerners or opposing fighters – are brutally slaughtered.

It has also taken to executing men it claims are gay, by throwing them off of tall buildings and pelting them with rocks in IS-produced videos.

Members of the terrorist group, which has published a number of graphic videos featuring the murder of supposed gay men, holds power across parts of Iraq, Syria and Libya.