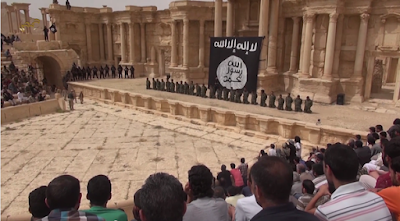 Antinous visited the fabled city of Palmyra with Hadrian and saw this lovely amphitheatre.

The video shows the soldiers lined up on their knees on the stage of the Roman amphitheatre, which had formerly been used for an annual festival in the city. 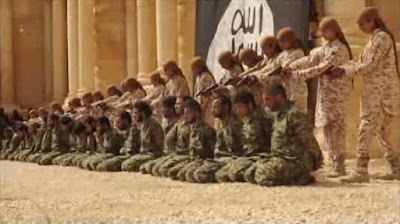 A baying crowd of men and boys gathered in the restored ruin waiting for the slaughter, many wearing military uniforms and headscarves.

Behind each condemned man stands a child executioner, all wearing desert camouflage and brown bandanas, many of whom appear to be no older than 12 or 13 years old.

ISIS fighters can be seen standing or sitting on top of the ancient ruins, watching over the crowd as they wait for the slaughter.

A leader speaks to the audience, in front of an enormous DAESH flag draped across the back of the stage. 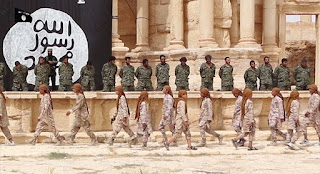 On a command, the condemned soldiers are killed simultaneously with a shot to the head.

DAESH captured the historic city on May 21, and has been systematically destroying the city's treasured ancient monuments.

The group was accused of executing hundreds of people in and around Palmyra since it swept into the city in May, after a lightning advance across the desert from its stronghold in the Euphrates Valley to the east.

DAESH is known for using children – dubbed ‘caliphate cubs’ – as suicide bombers, soldiers and executioners in their attempts to instill fear across Iraq and Syria.

Authorities fear that the use of children as soldiers and suicide bombers will only increase in the coming months.
Posted by Hernestus at 9:00 AM