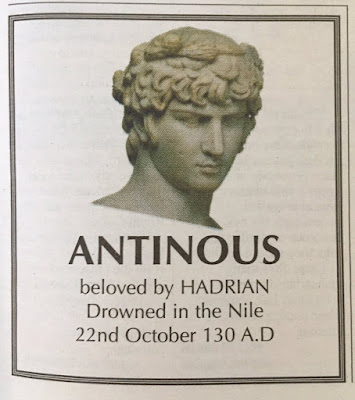 LATE October is the time of the Sacred Nights of Antinous ... culminating with the death and deification of Antinous.

In the modern religion of Antinous, we commemorate the Death of Antinous on 28 October ... but many scholars and Antinous adherents believe 22 October may have been the date.

Some faithful worshipers purchase obituary death notices in newspapers on the anniversary, such as the one above. 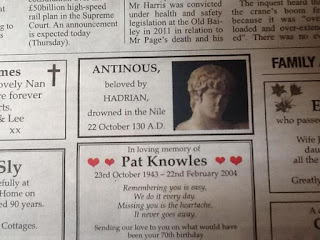 The death notice at the left was published in the Camden New Journal on 17 October 2013.

The exact date is uncertain.

All we know for certain is that his death occurred in the final week of October during a visit to Egypt with Emperor Hadrian in the year 130 AD.

Near the Egyptian village of Hir-wer, Antinous fell into the Nile and drowned. Antonius Subia says:

"Antinous fell into the Nile, beneath the swirling waves, but when his body was pulled from the water ... a God emerged. Antinous is our God, he has accomplished the salvation of all lovers of his beauty. His is our salvation. He is Antinous the Gay God. He is the last pagan God of Classical Rome."