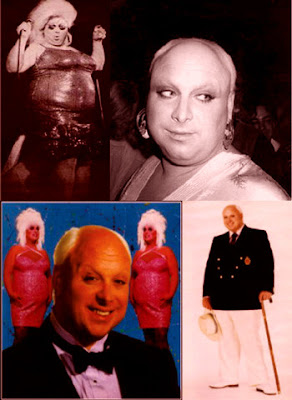 Described by People magazine as the "Drag Queen of the Century," Divine often performed female roles in both cinema and theater and also appeared in women's wear in musical performances.

Even so, he considered himself to be a character actor and performed male roles in a number of his later films.

He was most often associated with independent filmmaker John Waters and starred in ten of Waters's films, usually in a leading role.

Concurrent with his acting career, he also had a successful career as  a disco singer during the 1980s, at one point being described as "the  most successful and in-demand disco performer in the world."

"When we started in those days, drag queens were square," Mr. Waters explained. "They hated Divine: they wanted to be Bess Myerson. And Divine would show up in a see-through miniskirt with a chainsaw instead of a pocketbook."

The Divine look, which stylist Van Smith first created in 1972 for Pink Flamingos, had three components. First was the hair, shaved back to the crown to allow more room for eye makeup.

Second was the makeup, acres of eye shadow topped by McDonald's-arch eyebrows; lashes so long they preceded the wearer; and a huge scarlet mouth. Third were the clothes: shimmering, skintight numbers that gave Divine a larger-than-life female sensuality.

The net effect, as Mr. Smith ordained it, was a cross between Jayne Mansfield and Clarabell the Clown.

"If you look at anything that Divine wore, you sure couldn't find that off the rack," Mr. Waters said.

All of Divine's costumes were constructed by a Baltimore woman who made outfits for strippers. Subtle they were not. There was the red fishtail dress from Pink Flamingos, in which Divine looks equal parts mermaid, Valkyrie and firetruck. And there was the sheer wedding gown she wears in Female Trouble (1974), underwear not included.

Divine once famously said that if anybody was shocked by a 300-pound drag queen in a slinky cocktail dress "then maybe they need to be shocked." He himself would describe his stage performances as "just good, dirty fun, and if you find it offensive, honey, don't join in."

As a part of his performance, he would constantly swear at the audience, often using his signature line of "fuck you very much", and at times would get audience members to come onstage, where he would fondle their buttocks, groins and breasts.

He became increasingly known for outlandish stunts onstage, each time trying to outdo what he had done before. At one performance, held in the Hippodrome in London, that coincided with American Independence Day, Divine rose up from the floor on a hydraulic lift, draped in the American flag, and declared that "I'm here representing Freedom, Liberty, Family Values and the fucking American Way of Life."

When he performed at London Gay Pride parade, he sang on the roof of a hired pleasure boat that floated down the Thames passed Jubilee Gardens, whilst at a performance he gave at the Hippodrome in the last year of his life, he appeared onstage riding an infant elephant, known as Bully the Elephant, who had been hired for the occasion.

Divine and his stage act proved particularly popular amongst gay audiences, and he appeared at some of the world's biggest gay clubs, such as Heaven in London. According to Divine's manager, Bernard Jay, this was "not because Divine happened to be a gay person himself... but because it was the gay community that openly and proudly identified with the determination of the female character Divine."

He was also described as "one of the few truly radical and essential artists of the century ... who was an audacious symbol of man's quest for liberty and freedom."

On the evening of March 7, 1988, a week after his starring role in "Hairspray" was released, Divine was staying at the Regency Hotel in Los Angeles. The next day, he auditioned for a part in the Fox network's television series "Married ... With Children". After dining with friends and returning to the hotel, he died in his sleep of an enlarged heart at age 42.