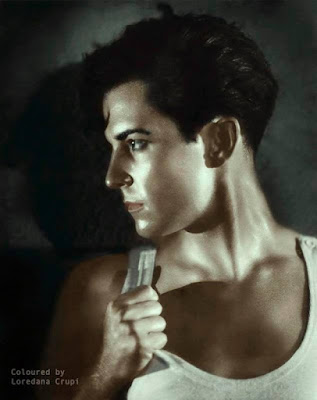 HE was proclaimed a saint of Antinous on the 50th anniversary of his horrific and homophobic murder: gay silent film icon Ramón Novarro ("Ben-Hur," "Mata Hari") was slain by two male hustlers on 30 October 1968 in Hollywood.

The first Latin American actor to become a superstar, Ramon Novarro was for years one of Hollywood's top actors.

Born Ramón Samaniego to a prominent Mexican family, he arrived in America in 1916, a refugee from civil wars.

By the mid-1920s, he had become one of MGM's biggest box office attractions, starring in now-classic films, including "The Student Prince," "Mata Hari," and the original version of "Ben-Hur."

He shared the screen with the era's top leading ladies, such as Greta Garbo, Myrna Loy, Joan Crawford, and Norma Shearer, and became Rudolph Valentino's main rival in the "Latin Lover" category.

Yet, despite his considerable professional accomplishments, Novarro's enduring hold on fame stems from his tragic death ... his bloodied corpse was found in his house on Halloween 1968 in what has become one of Hollywood's most infamous scandals.

A lifelong bachelor, Novarro carefully cultivated his image as a man deeply devoted to his family and to Catholicism. His murder shattered that persona.

News reports revealed that the dashing screen hero had not only been gay, but was dead at the hands of two young male hustlers.

Since then, details of his murder have achieved near mythic proportions, obscuring Novarro's professional legacy.

For a comprehensive look at this saint of Antinous, the book Beyond Paradise presents a full picture of the man who made motion picture history.

Including original interviews with Novarro's surviving friends, family, co-workers, and the two men convicted of his murder, this biography provides unique insights into an early Hollywood star ... a man whose heart was forever in conflict with his image and whose myth continues to fascinate today.