THIS STUNNING ANTINOUS SCULPTURE
WAS BRIGHTLY PAINTED AND GILDED 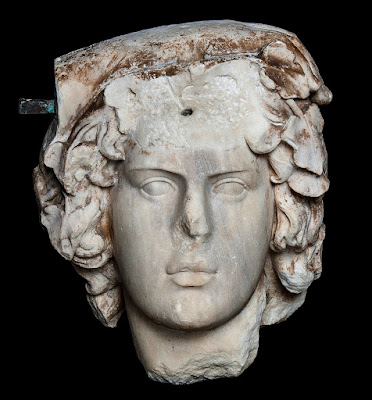 A stunning new exhibition of Antinous sculpture in San Antonio, Texas, has amazed the world of archaeology with the revelation that this head of Antinous as Dionysus once was painted in bright colors ... and partially gilded in glittering gold.

The color is long gone, but thanks to modern technology, the San Antonio Museum of Art has a better idea of what the sculpture looked like when it was newly created. In 2011, a study of the piece revealed a thrilling surprise: minute traces of gold.

The exhibition Antinuous, the Emperor’s Beloved: Investigating a Roman Portrait provides a peek at the museum’s behind-the-scenes research and reveals what the museum has learned about the artwork, the only marble statue of Antinous on which gilding has been found.

“It was really the unexpected discovery of the gilding that drove the whole project and inspired doing things like looking more closely at the pose and the figure of Antinous,” said Jessica Powers, the museum’s curator of art of the ancient Mediterranean world.

The marble head of Antinous in the museum’s collection was a gift from Gilbert M. Denman, Jr. 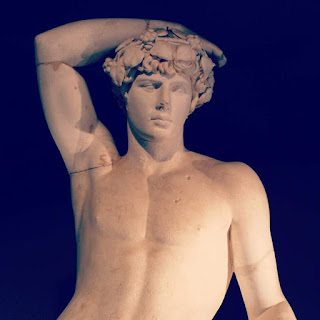 It originally was part of a larger-than-life sculpture depicting Antinous as Dionysus, the Greek god of wine, theater and religious ecstasy.

A hand ... once connected to an arm ... rests on top of the the marble head, which is crowned with thick curls and an ivy wreath.

The famous Frugiferus statue of Antinous (pictured at left) shows how it would have looked.

About six years ago, Michelle Bushey, then a chemistry professor at Trinity University, reached out to Powers. The school recently has acquired an X-ray fluorescence instrument.

Shaped like a ray gun from a sci-fi movie, it can be used to analyze the elements present in a variety of materials, including the composition of historic pigments on paintings and other objects. Bushey offered to examine works in the museum’s collection.

“Some of the pieces that we have have been in collections for a long time, so they’ve been really heavily cleaned, like down to the marble,” Powers said. “When that happens, you lose the polychromy.”

Since the hair and ivy wreath on Antinous’ portrait had not been overly cleaned, it was a good candidate, Powers said. After the initial readings were taken, a research assistant who was working with Bushey emailed Powers.

"She said, ‘Would you expect to find gold in the XRF readings for a marble portrait?’ and suddenly I was very interested in what was coming out of the XRF,” Powers said. “So we did more XRFs and were able to show that bits of gilding survived on all of the leaves of the ivy wreath. Then we examined the surface with the microscope and we were able to see it.” 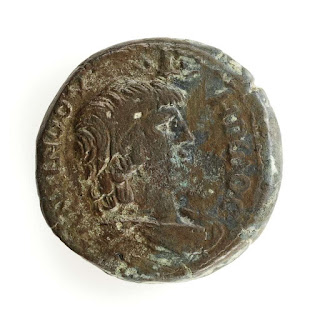 Those findings kicked off a fuller investigation. In addition to Bushey, Powers worked with Mark Abbe, a professor in the department of classics at the University of Georgia, to better understand the portrait’s gilding and original appearance.

In addition to the Antinous head, the exhibit also features a portrait of Hadrian, and ancient coins of Antinous (left).

As part of the exhibition programming, Bushey, who is currently with the National Science Foundation, gave a talk at the museum about the use of X-ray fluorescence to unlock ancient and historical secrets.

Using the technology on artworks “gives me a way to connect with people who might otherwise recoil at the word chemistry,” Bushey said.

“But there’s also the aspect of this is our collective heritage and our history and to understand better the importance of these items and how people functioned, I don’t think that we give people enough credit who lived in maybe less technologically advanced times. I think if we really go back and take a look at what they were able to accomplish, given what they know, given what we know, given our tools and given their tools, we’ve lost a lot of knowledge about how important these items were, how people did things and how they understood the world.”

Posted by Hernestus at 7:11 PM