ANTINOUS ON MOUNT CASIUS
WAS NEARLY STRUCK BY LIGHTNING 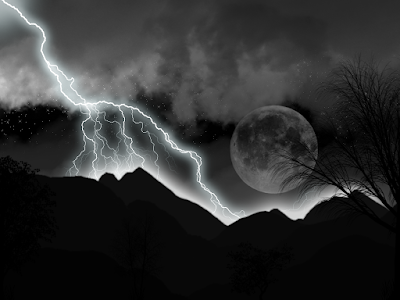 IT was at the season of the Equinox in the year 129 that the imperial court ascended Mount Cassius (also called Mons Casius, Mount Kel or Mount Casius).

They climbed the mountain overlooking the sea because on top of it was a Temple of the Sun.

A storm broke while they made their ascent, and Hadrian had the priests conduct the Equinox ceremony in the rain.

During the sacrifice at the altar, a bolt of lightning struck with a horrific, earth-shattering clap of thunder ... killing the priest and the sacrificial animal together.

This was taken as a very significant portent, one that perhaps Antinous alone comprehended, the darkness of the coming death and transfiguration were presaged.

Hadrian took it as a sign that the gods of Syria had turned against him, thinking it was Baal-Zeus who struck down the priests as a warning to Hadrian of what lay ahead when the court entered Jerusalem. 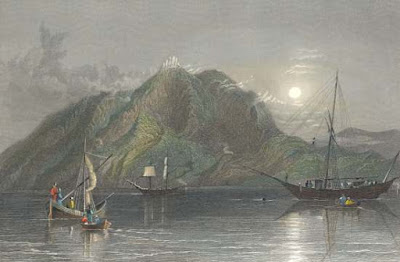 Perhaps it is all a myth and a legend, of course. There were many myths and legends about the events leading up to the deification of Antinous.

Researching background information on the Lightning Bolt Omen on Mount Cassius, we stumbled upon an old Epistle which Antonius Subia wrote to the original members of this religion at this time of year back in 2002. There were only a handful of followers ... about five or six.

Take a moment to read what Antonius wrote so many years ago:

"Whatever myths and mysteries were fabricated to legitimize the Religion of Antinous, we can be sure that they were only for the benefit of the vulgar populace, dependent on poetry and allegory. The Priesthood of Antinoopolis however, had to deal with the truth. I can't help but think that the pinnacle of his mysteries, revealed to only the most devoted, was the unsettling revelation that Antinous the God was no more than a boy, just as any of them were or had been."

And Antonius says that THAT fact was what makes our religion so special. He goes on to write:

"That Antinous lived a truly human life, died, and miraculously became a God is what captivates me, even more than his beauty. Unlike so many other, mythical gods, there is a definite level of certainty that all that is said about him is true. It is only when one begins to dig deeper that the mysteriousness of his story becomes manifest. There is a desperate shortage of evidence from his time, almost nothing at all, and what little is written is rare and clothed in foreign languages. Antinous, because of the peculiarity of his divinization, is not a subject of great philosophical interest as are the other, more popular gods."

And then he hints at the idea of HOMOTHEOSIS:

"The most important impression one receives from his story, which is utterly non-mythological, is that if he could become a God, with a star, and a flower, and an eternal name, then what prevents all of us from following in his trail? Antinous destroys the very concept of Godhood. For the vast majority, this is an incomprehensible concept, but Antinous is not a god of the populous, who remain simple in their acceptance of theology … then as now." 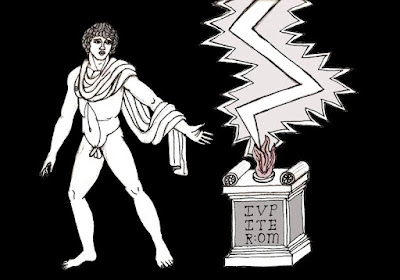 And he says Antinous is the divine spark of Sacred Homosexuality:

"Homosexuals suffer from a terrible lack of Gods and divine heroes. Heterosexuality has an overabundance.

He adds: "I don't see the harm in claiming the truth of our one and only patron saint and god. The emphasis of our day, in which homosexuality is gaining acceptability, seems to be on bringing our sexuality into line, and in conformity to the rest of the population. But what we need most is our own identity, not as an aberration, or a peculiarity, or a mere deviation from the norm, but as a sanctification, a sacred state of blessedness.

"For thousands of years we have been considered a degeneration, a sin, and even a disease of lust. Now people are beginning to see that we are just different, but there is almost no talk, even amongst ourselves, that we are a wonder of the human species, a divine grace, a delicate flower possible only in the most elevated levels of civilization. It is no coincidence that our sexuality has regained the prominence of respect that it knew in the age of the Antonines, and Antinous is the emblem, in my heart, of our blessedness, then as now."

Antonius then says non-pagans balk at our religion, but he also notes that traditional pagans also have problems with the concept of Antinous as the Gay God for the 21st Century, rather than remaining a reconstructed Classical deity from ancient times:

"Already I have encountered the difficulty of explaining what is so personal to an uninformed listener, and this conflict of interest, as it were, may only increase. My only hope is that Antinous has already prepared the way, as he has done with me, and a few others. However difficult and testing his message may be to bring to the world, I trust that those who are prepared to listen will need very little explanation, the truth being already ingrained within the depth of their soul. 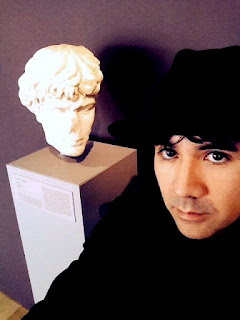 "All I can ever do is turn the key that they alone suspected was there, but the door is for them to open. The statues, and the stark reality of his life, show that there are many sides to our Antinous, none of which is ultimately and universally true.

"However much we may delineate and formalize his religion, it must always remain founded on personal connection, and individual truth.

"I am prepared to say that this is far more simple than it seems, if we are willing to succumb wholly to absolute freedom in ourselves, and in others."

Antonius (writing back in 2002, remember) has a final question ... a question he has posed to each new priest over the years:

"My question is this, if ever you felt yourselves to be secret priests, evangelists of beauty, and missionaries of sacred homosexuality among these barbarians of our age, what would you say to a soul in whom you could plainly see Antinous, just beneath the skin? But more importantly, why would you even mention his name?"

This weekend, as the shadow of the Super Moon Eclipse falls upon the Earth, and as we remember the story of the Lightning Omen on Mons Cassius, it is perhaps good to remember the founding tenets of our religion:

Antinous was a flesh-and-blood human being of lowly birth.


Antinous and Hadrian were male-male lovers.


Antinous died tragically, perhaps in sacrifice for his beloved Emperor.


Hadrian "wept like a woman" and issued a decree establishing the Religion of Antinous … declaring Antinous a God … the last Classical Deity.

And the question for us today is whether we would recognize a modern-day Antinous if he walked up to us on the street, or if we saw him on TV or on the Internet.

More importantly, can we see Antinous in the eyes of all gay men.

Because that's the first place to look for him.