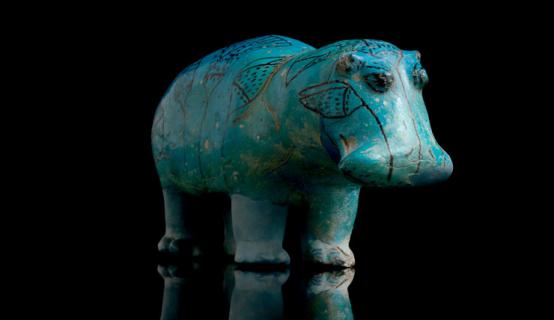 WILLIAM the most famous small ancient Egyptian hippopotamus is marking his 100th birthday at the Metropolitan Museum of Art in New York City … which is not bad since the little blue figurine is nearly 4,000 years old.

William will be featured in a small installation on view through April 1, 2018, in the Lila Acheson Wallace Galleries of Egyptian Art (Gallery 107). 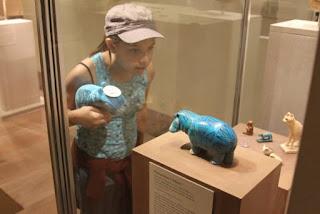 The display celebrates the 100th anniversary of the Museum's acquisition of the faience hippo.

Nicknamed "William," the sculpture is the unofficial mascot of The Met.

In conjunction with the anniversary, new content about the sculpture will be added to the Museum's website this fall, and diverse events for Museum visitors have been organized for the weekend of November 17–19.

Created in the Middle Kingdom (Dynasty 12, reign of Senwosret I–Senwosret II, ca. 1961–1878 BC) and excavated in 1910, the exhibition's ancient Egyptian faience hippopotamus was acquired by The Met in 1917. 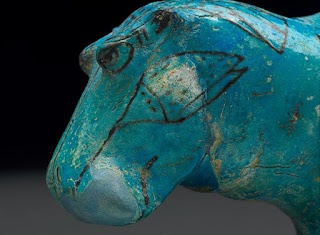 The origin of its nickname can be traced to a 1931 story in the British humor and satire magazine Punch about a family that consults a color print of The Met's hippo … which it calls "William" ...as an oracle.

Subsequently, the story was reprinted in The Metropolitan Museum of Art Bulletin.

Hippopotamus figurines were popular in Egypt’s Middle Kingdom, when they were deposited in tombs to supply the deceased with regenerative powers.

The surfaces of the sculptures were often painted with lotus flowers, which were part of the animal’s natural habitat and additionally symbolized rebirth. Because of the hippopotamus’s dangerous nature, and the ancient Egyptian belief that depictions could come to life, three of the sculpture's legs were probably broken on purpose in antiquity, rendering the animal immobile.