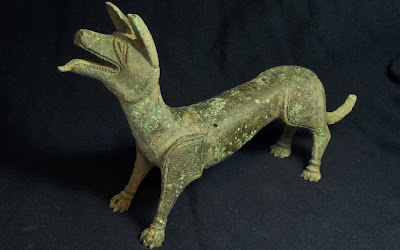 A magical bronze dog talisman that licks the wounds of soldiers to miraculously heal them has been found in Britain.

It is part of a breathtaking hoard of ancient Roman bronze artifacts, described as the first of its kind in British history, has been unearthed by a pair of metal detector enthusiasts.

The 4th century hoard found by Pete Cresswell and his brother-in-law Andrew Boughton in Gloucestershire includes a sculpture of a "licking" dog never found before in the UK.

The licking dog is an example of a healing statue, and may be linked to a Roman healing temple at Lydney, near the Forest of Dean.

Experts said there was also the possibility that a previously undiscovered Roman temple may be sited elsewhere in the county.

The artefacts appear to have been deliberately broken and hidden - with the exception of the dog statue, which remains intact.

The dog statue may have been brought to Roman Britannia by a Legionnaire from Asia Minor, where the Haralez "ghost dogs" licked the wounds of soldiers.

Antinous no doubt was familiar with the HARALEZ, the beneficent canine spirits of the remote mountains of his native Bithynia and Armenia.

While the mountain mythology of that region possesses many heroes, monsters and spirits, the Haralez have always been the most beloved.

The Haralez assume canine form and guide and protect humans in peril.

Archaeologists believe the items could have been stashed by a metal worker who intended to retrieve them at a later date in order to melt and re-cast them.

The artefacts are of such significance that they need to be kept under special conditions for insurance reasons, and are currently being stored at Bristol museum, where they are being photographed and catalogued on an online database.

Experts are piecing together the clues, and the findings will be presented by the British Museum at a launch event, likely to take place around the end of the year.

Posted by Hernestus at 8:15 PM