LABYRINTH OF CATACOMBS DISCOVERED
ACROSS THE NILE FROM ANTINOOPOLIS 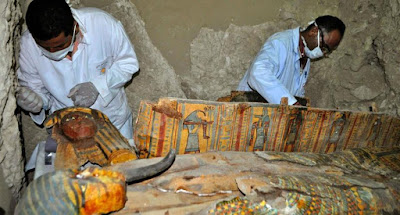 Archaeologists have discovered an underground catacomb containing numerous mummy-filled corridors at an ancient cemetery immediately across the Nile from Antinoopolis, officials announced today.

The Greco-Roman era catacomb, located at Tuna el-Gebel in the ancient city of Thoth/Hermes Hermopolis, can be entered only through a narrow shaft which leads underground.

At the bottom of the shaft, archaeologists found that "there are many corridors and many burial places for mummies," said Mohamed Salah bn Mohamed Ahmed El-Kholy, a professor at Cairo University, at a press conference held this morning (13 May 2017) at Tuna el-Gebel. 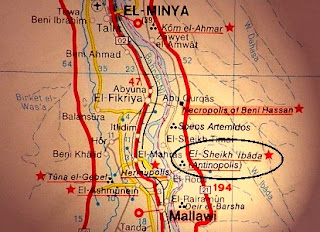 Hadrian and Antinous visited Hermopolis in October of the year 130 AD ... and it was there that Antinous perished mysteriously in the Nile.

Hadrian established the city of Antinoopolis at the spot on the other side of the Nile where Antinous drowned.

Tuna el-Gebel is on the edge of the desert just beyond Hermopolis. Tuna el-Gebel is the site of the famed CATACOMBS OF THOTH filled with thousands of baboon mummies sacred to Thoth/Hermes (photo at right).

The most famous underground catacombs in Egypt are the vast SERAPEUM labyrinth catacombs lined with tombs of bulls sacred to the god Serapis. 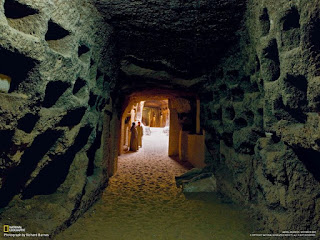 It is highly likely that Antinous visited both the Serapeum and the Catacombs of Thoth in the final weeks and days of his life.

There has been speculation throughout history that Antinous discovered an Egyptian secret of transferring the essence of life from a healthy person to an ailing person ... and that he sacrificed his life to prolong the life of his beloved Emperor Hadrian.

Hermopolis was was one of the most sacred cities in ancient Egypt ... the city sacred to Thoth ... located midway between the traditional capital cities of Memphis/Mennefer in the north and Thebes in the south.

It is no coincidence that the "heretic" Pharaoh Akhenaten established his capital a few miles (20 km) from Hermopolis and Antinoopolis ... to be at the spiritual center of Egypt.

Thoth is the god who hears the words of Ra and brings them into being. He taught magic to Isis. 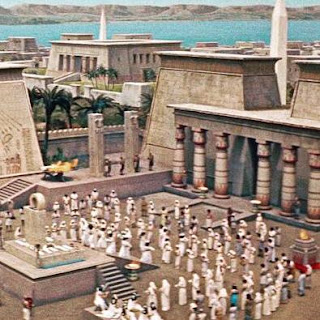 He wrote the famous "Scroll of Life" which contains the incantation by which Isis brought slain Osiris to life.

Is it possible Antinous learned the secrets of life and death ... in order to become a god like Osiris?

Archaeologists with Cairo University have been excavating at Hermopolis Tuna el-Gebel for about 80 years, El-Kholy said.

Excavations are ongoing and will continue for many more seasons, El-Kholy said.

So far, experts have found at least 17 mummies as well as pottery and numerous long, slender pieces of earthenware vessels that could have held liquids, according to a video interview. The largest examples appear to be about 3 feet (0.9 meters) long.

Posted by Hernestus at 6:02 PM