FOR the first time ever, Egyptologists have discovered a magical funerary garden at a tomb in Egypt which was designed to provide the deceased with herbal nourishment to ensure life throughout eternity.

The 4,000-year-old garden was discovered on a hill in what was once the ancient city of Thebes, As Laura Geggel reports for Live Science, it was found by archaeologists from the Spanish National Research Council (CSIC). 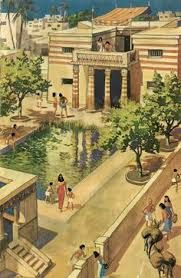 Egyptians loved gardens in their homes, and this discovery proves they created magical gardens for their tombs to give them sustenance for infinity.
The garden was located in a courtyard at the entrance of a rock-cut tomb, according to a CSIC press release.

It measures about 10 feet by six-and-a-half feet, and is divided into a neat grid of smaller beds. Two beds in the center of the grid are set higher than the others, suggesting that they once held small trees.

In one corner of the garden, the team came across a remarkable sight: a tamarisk shrub that stood upright, its roots and trunk still attached.

In a little bowl next to the shrub, they found the remains of dates and other fruit, which may have been placed there as a religious offering.

Researchers will need to analyze seeds found in the area before they can definitively say what other plants grew in the garden. But José Manuel Galán, a research professor at CSIC, ventured a few guesses. 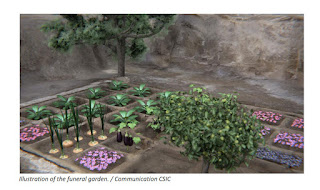 "The plants grown there would have had a symbolic meaning and may have played a role in funerary rituals," he says, according to the press release.

"We know that palm, sycamore and Persea trees were associated with the deceased's power of resurrection. Similarly, plants such as the lettuce had connotations with fertility and therefore a return to life."

Lettuce was sacred to Min, ithyphallic god of fertility, because of its milky juice, reminiscent of semen ... also related to the god Seth (he became pregnant after eating a mixed salad).

Lettuce also figured prominently in the Egyptian story of the struggle between Seth and his nephew Horus which involved ingesting semen disguised as lettuce juice. 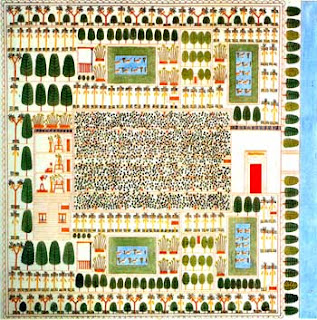 By studying the garden, researchers may be able to gain a better understanding of the physical environment in Egypt thousands of years ago. The garden … and the magical significance of the greenery inside it … can also "provide information about religious beliefs and practices as well as the culture and society at the time of the Twelfth Dynasty," Galán says.

"The necropolis thus becomes, as the ancient Egyptians themselves believed, the best way to understand and embrace life."
The find dates to about 2000 BC, the Period of Reunification in Egypt. It was a key turning point in ancient history. During this time, the regions of Upper and Lower Egypt were united, and Egyptian culture began to flourish. Thebes rose to prominence as the new capital of the kingdom.