COLOSSUS OF RHODES TO RISE AGAIN
AS A WALK-IN, SOLAR-POWERED MUSEUM 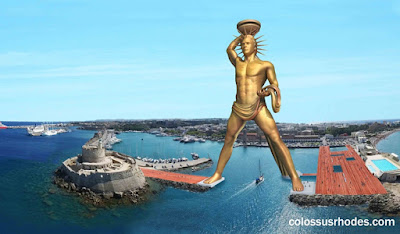 THE Colossus of Rhodes will rise again as a walk-in, solar-powered museum ... if a group of ambitious Greek entrepreneurs find funding.


Young professionals from Greece, Spain, Italy and the United Kingdom have been inspired to take up the ambitious COLOSSUS OF RHODES PROJECT.

The young professionals are planning to create a gigantic 150 meter-high museum-structure, that will house thousands of archaeological findings that have long been abandoned beneath layers of dust in several storage areas in Rhodes, simultaneously arousing the same emotions that visitors who arrived on the island more than 2,200 years ago felt.

The colossal statue will also host a cultural center and a library, while at the same time will regain its ancient function as a point reference for boats (lighthouse). 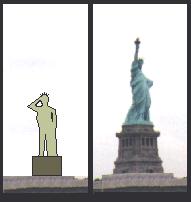 Its size will be larger than the original structure, while its "skin" will be covered by solar panels, making it energy autonomous.

Carved by Chares of Lindon, one of antiquity's greatest sculptors, the original Colossus of Rhodes was erected in homage to the Sun god Apollo-Helios. 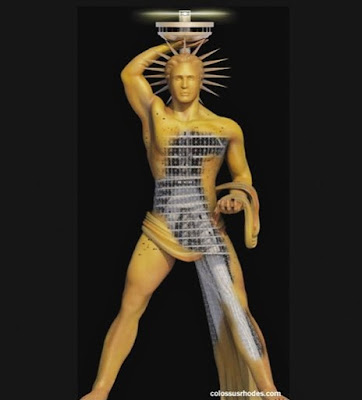 For almost seven decades it stood over Rhodes before being destroyed by an earthquake in 226 BC.

In later years, its huge bronze and marble parts were carted off by Arab tradesmen.

"Even lying on the ground, it is a marvel," wrote Pliny the Elder. It was so big, he said, that "few people can get their arms around its thumb".

Although historians have spent years arguing about the wonder's exact location, artists have always depicted it straddling Rhodes' imposing harbor.

Unlike the original statue, which took Chares 12 years to carve in situ, the new statue could be built in less than half that time if adequate funding is found, project organisers say.

While the Statue of Liberty was built in France and then assembled in New York, the new Colossus is expected to be built by locals on the island.

The Colossus was included in Sidon's List of the Seven Wonders of the World compiled some 2,150 years ago along with The Pyramids, the Walls and Hanging Gardens of Babylon, the Temple of Artemis at Ephesus in modern Turkey, the Statue of Zeus at Olympia, the Mausoleum at Halicarnassus and the Lighthouse at Alexandria.

Antinous and Apollo were equated with each other by the Ancient Priests of Antinous. Flamen Antonyus Subia describes Antinous-Apollo as Guardian of Civilization:

"Antinous-Apollo is more deeply concerned with the welfare of mankind. One finds the socially conscious aspect of this religion, the ways in which it can be used to heighten the consciousness of society. Those who seek to benefit our world with the wisdom and grace that the muses inspire follow this face of Antinous whose statue has always stood in the sanctuary of Delphi on the slope of Mount Parnassus. Antinous speaks through visions, dreams and the understanding of oracles. One who loves this god seeks after wisdom and learning, and after the enlightenment of all that is veiled in darkness and ignorance."

Here is the official video for this ambitious new project: