EMBRACING COUPLE AT POMPEII
'COULD HAVE BEEN GAY LOVERS' 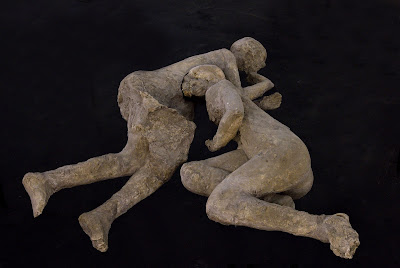 IT is an iconic image which conveys the human dimension of one of the world’s worst natural disasters that still resonates 2,000 years later.

Two bodies found wrapped in a poignant embrace in their final moments as they were covered beneath molten rock and layers of ash in the ancient city of Pompeii when Mount Vesuvius violently erupted in 79 A.D.

The bodies were dubbed "The Two Maidens" when they were first discovered but in a startling discovery this week scientists found the two bodies were actually male ... raising speculation that they may have been gay lovers. 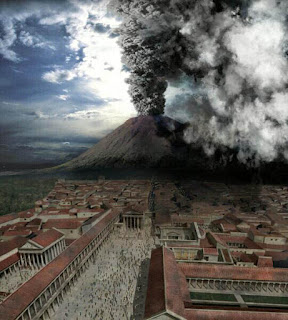 "We always imagined that it was an embrace between women. But a CAT scan and DNA have revealed that they are men," he said.

"You can't say for sure that the two were lovers. But considering their position, you can make that hypothesis. It is difficult to say with certainty."

For the past two years restorers have been working on the carefully preserved plaster casts of 86 victims who were trapped in Pompeii following the deadly eruption of Vesuvius.

The bodies of the "Two Maidens" were discovered in the House of the Cryptoporticus during excavations at the World Heritage site led by archaeologist Vittorio Spinazzola when he was superintendent at Pompeii in the early 20th century. 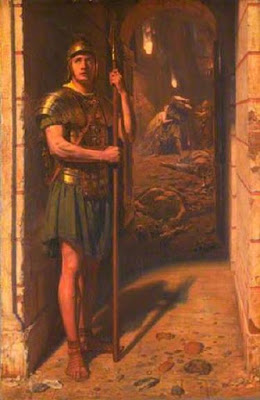 One of the two bodies is lying at a right angle to the other and seen with his head resting on the other's chest in search of comfort and perhaps protection.

Extensive anthropological tests of the duo's bones and teeth have revealed that one of the them was a young man aged about 18 years of age while the second was probably an adult male aged 20 years or older.

"The use of anthropological and DNA research always reveals more," Osanna said.

"It is a fundamental instrument for scientific knowledge because it gives us certainty in the archaeological field in what would otherwise be only hypothesis," he added.

Professor Stefano Vanacore, head of the Pompeii research team, said it was impossible to determine the nature of the relationship between the two men.

"When this discovery was made, that they were not two young girls, some scholars suggested there could have been an emotional connection between the pair. But we are talking about hypotheses that can never be verified." he said.

"What is certain is that the two parties were not relatives, neither brothers, nor a father and son," he stressed. 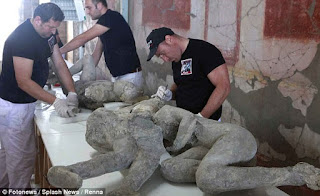 The Pompeii scientific team already knew Pompeiians had excellent teeth. In 2015 they used CAT scans to examine the remains of 30 people and attributed their top dental health to a Mediterranean diet rich in fibre and low in sugar.

During the violent eruption of Vesuvius many victims were buried beneath layers of ash that gradually hardened into pumice and encased their bodies.

Over time the soft tissue of the bodies disappeared and in a pioneering technique archaeologists began pouring plaster into the cavities during the 19th Century.

Once the plaster hardened, the archaeologists chipped away at the surrounding pumice to extract detailed casts of the victims and these are the bodies that are being examined by the scientific team today.