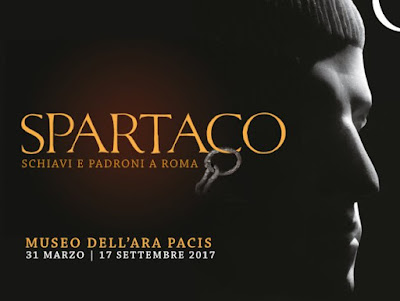 AUGUSTUS Caesar's Ara Pacis, the "Altar to Peace," offers visitors a spectacular exhibition on slavery in Ancient Rome this summer ... along with a spectacular weekend lighting show which reveals the structure's its true colors and shapes thanks to 3-D augmented reality.

The exhibition, which starts this weekend and runs through 17 September 2017, traces the history of slavery from the earliest days of Rome up to and including the Spartacus Slave Revolt in 71 BC ... and the crushing of the revolt.

The exhibition provides a detailed look at how slavery formed the basis of the Roman economy ... and social fabric.

Though the white-marble monument has lost its color over the centuries, visitors will able to see its intricate array of friezes in dazzling color.


This extraordinary event, which runs through 30 October 2017, starts from 8:00 p.m. and lasts until midnight on weekends. Admission is strictly limited to small groups of visitors for 45-minute tours.

Using special AR viewers (Samsung GearVR) and the camera device inserted in them, visitors can witness the fusion of 3-D virtual and real elements.

Maximum capacity is 300 visitors at any one time.

According to researchers from the Vatican museums, who have gone over every inch of the altar for traces of pigment, the Ara Pacis was brightly colored when unveiled by the Roman Senate in the year 9 AD. 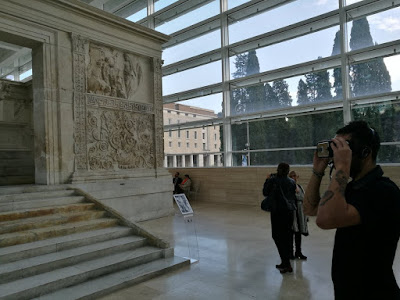 The West Facade is highlighted by a frieze called "The Lupercal Panel" which shows Romulus and Remus (suckled by the She-Wolf) being discovered by Faustulus the shepherd while Mars looks on.

The God of War is resplendent in a crimson cloak which contrasts with deep greens of the lower frieze's viney motif.

On the left panel of the East Facade (right), a goddess nurses the twins Romulus and Remus and, on the right-hand panel, Trojan hero Aeneas makes a sacrifice to the gods, all in the life-like splendor they enjoyed under the paint brushes of Roman craftsman. 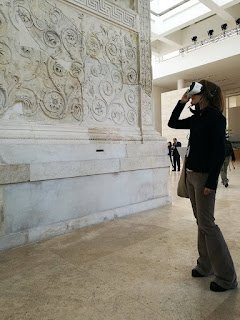 Scholars have suggested that the goddess variously might be Italia, Tellus (Earth), Venus, or Peace.

The Goddess of Peace (Pax Augusta) makes the most sense since the entire scene depicts the benefits of peace.

The exact identity of the goddess, however, remains in dispute.

The Altar marks the northern city limits. Travelers approaching Rome upon arrival at the port of Ostia would have seen the Altar on the west side of the Via Flaminia, the backdrop of which was the Seven Hills of Rome ... the "skyline" of Rome.

The Ara Pacis Augustae stood in the flood plain of the river Tiber, where it became buried under silt over the centuries. It was rediscovered in modern times and, after decades of on-again, off-again excavation, was finally fully restored under the rule of Benito Mussolini.
Posted by Hernestus at 9:00 AM